This blog has moved!

Due to the large amount of new information I am finding about mid-century Royals, Smith-Coronas and other portables, I am starting over. My new blog is the Bodemer Typewriter Collection, with a link here.

One of the creepiest songs I can think of

My analysis of Elusive Butterfly (1965) (the long one is creepier)

You might wake up some mornin'
To the sound of something moving past your window in the wind
(Ladder?)
And if you're quick enough to rise
You'll catch a fleeting glimpse of someone's fading shadow
(He noticed that she saw him?)
Out on the new horizon
You may see the floating motion of a distant pair of wings
And if the sleep has left your ears (he knows she was sleeping)
You might hear footsteps running through an open meadow (he's running across the front lawn?)

Don't be concerned, it will not harm you
(He says "it". Does that mean that he might?)
It's only me pursuing somethin' I'm not sure of
(He's pursuing her?)
Across my dreams with nets of wonder
(Can we verify that it is not a literal net?)
I chase the bright elusive butterfly of love
(Random victim, please, be concerned)

You might have heard my footsteps
Echo softly in the distance through the canyons of your mind (He can walk quietly. Always a good skill for a stalker)
I might have even called your name (it's about her, not a butterfly; he knows her name...)
As I ran searching after something to believe in
You might have seen me runnin'
Through the long-abandoned ruins of the dreams you left behind (projection?)
If you remember something there
That glided past you followed close by heavy breathin' (Eww. Please, call the cops) 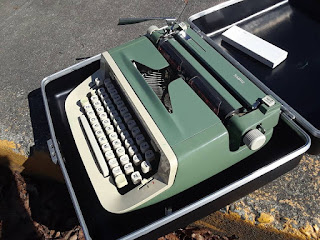 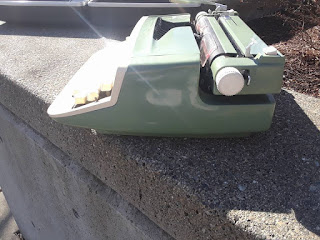 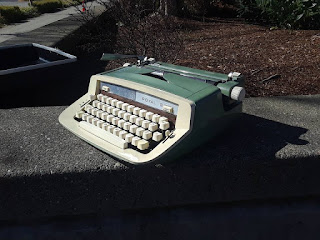 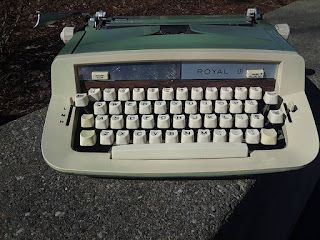 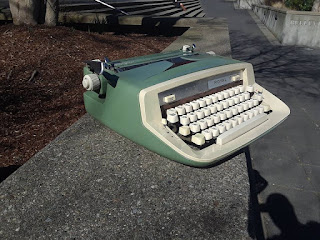 I am really proud of this one!

I promise not to use my blog too much to try to sell pens, but I am really proud of this ad. 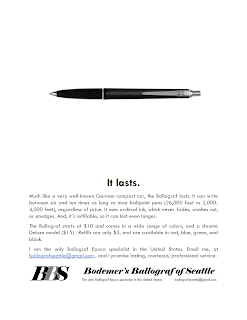 What do you do with the body of a 1960s Olympia SF with a trashed mechanism, and the mechanism of a 1970s SF with beat-up body panels? The Twolympia Mk II is my result 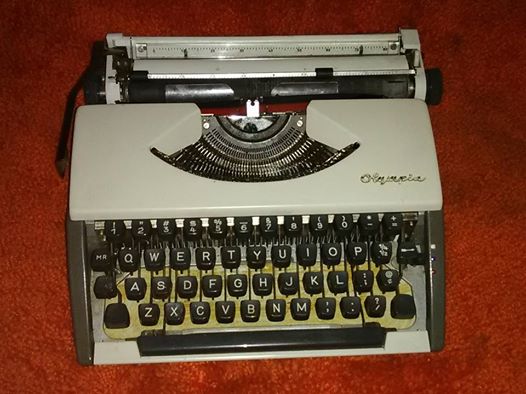 Special thanks to Richard Polt for creating the original Twolympia, using an SM9 mechanism in an SM3 shell 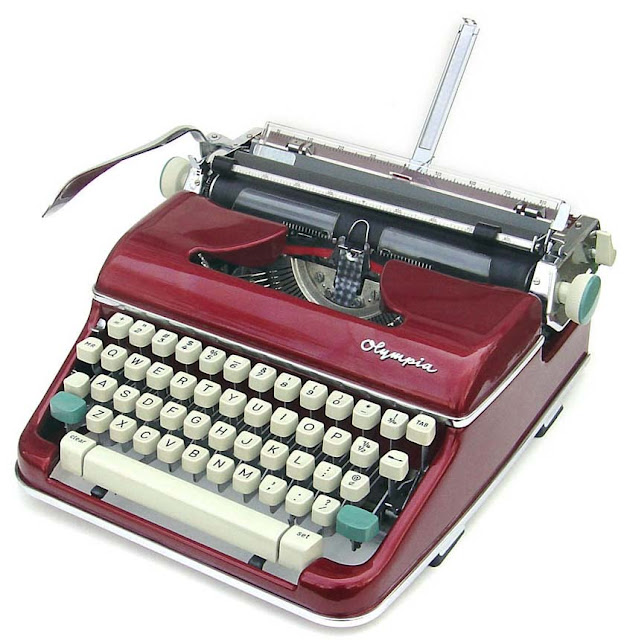 
The story of the Royal Mercury began in Tokyo, Japan in 1965. A knitting-machine company, called Silver-Reed had designed a typewriter, with the help of a leading industrial design firm, called GK-Design Group. Early models of Silver-Reed portables can occasionally be found in the United States; those marketed as “Royal” typewriters are much more common. It should be noted that by 1971, the only typewriter manufacturer that was still making typewriters in the United States was Smith-Corona.


The Royal Mercury has the distinction of being the first full-featured portable typewriter marketed towards children. Until the 1960s, all of the other typewriters marketed for children had been stripped versions of standard portables. (An excellent example is the Remie Scout.) Despite being marketed towards children, the Royal Mercury was originally designed for use by adults. At the time, Japanese-made goods were thought to be cheap and low-quality. However, Japanese-made toys were incredibly popular. As a result, Royal felt it would be a better idea to sell the Mercury to children.


While it was marketed nationally towards children, many Seattle-based stores marketed it towards the general public. One of these stores was Bartell Drugs, who described the Royal Mercury as “the ‘with-it’ portable that has everything. (Bartell Drugs)” [1] A 1967 advertisement indicates that Bartell Drugs initially sold Royal Mercury typewriters equipped with “Elite“(smaller) type. (Bartell Drugs). Frederick & Nelson, a Seattle-based department store described the Mercury as “a handsome, lightweight model ideal for traveling and students at home or school.” (Frederick & Nelson). The Bon Marche, a large, Seattle-based department store[2]advertised the Mercury as having “’it’ designing with all the great features: touch-set margins, paper table scales, wide carriage, full-size 88 character board, three line spaces, $35.88” (The Bon Marche). The J.K. Gill Company, a Portland, Oregon-based office-supply store pitched the Mercury as the “get-with-it portable that has everything including a get-with-it price! Full-size office typewriter keyboard, touch regulator, two-color ribbon, stencil cutter, calibrated paperbail, 1, 1½, 2 line spacing, dual shift keys, weighs only 10 pounds with case.” (J.K. Gill Company).


Many other Royal Portables used the design of the Royal Mercury, including the Royal Jet, and the Royal Signet, all of which had fewer features than the Mercury. The Royal Mercury was discontinued around 1975. A related portable is the Royal Sprite, which is found in a plastic shell, and has a transistor radio built into the console carrying case.


[1]Bartell Drugs has the distinction of being the oldest drugstore chain in the United States.