This Royal Custom typewriter is basically a Royal Safari, but in a metallic red color scheme. I have been looking for one for quite a while; I once saw a red Safari for $75 five years ago in Snohomish, WA, but this one was a much better deal at $20! The only part it needs is its ribbon cover (the same design was used from 1962 until 1982, so finding a replacement should be easy)

It should be noted that this is not a "Regimental Red" Royal, but rather a burgundy typewriter. 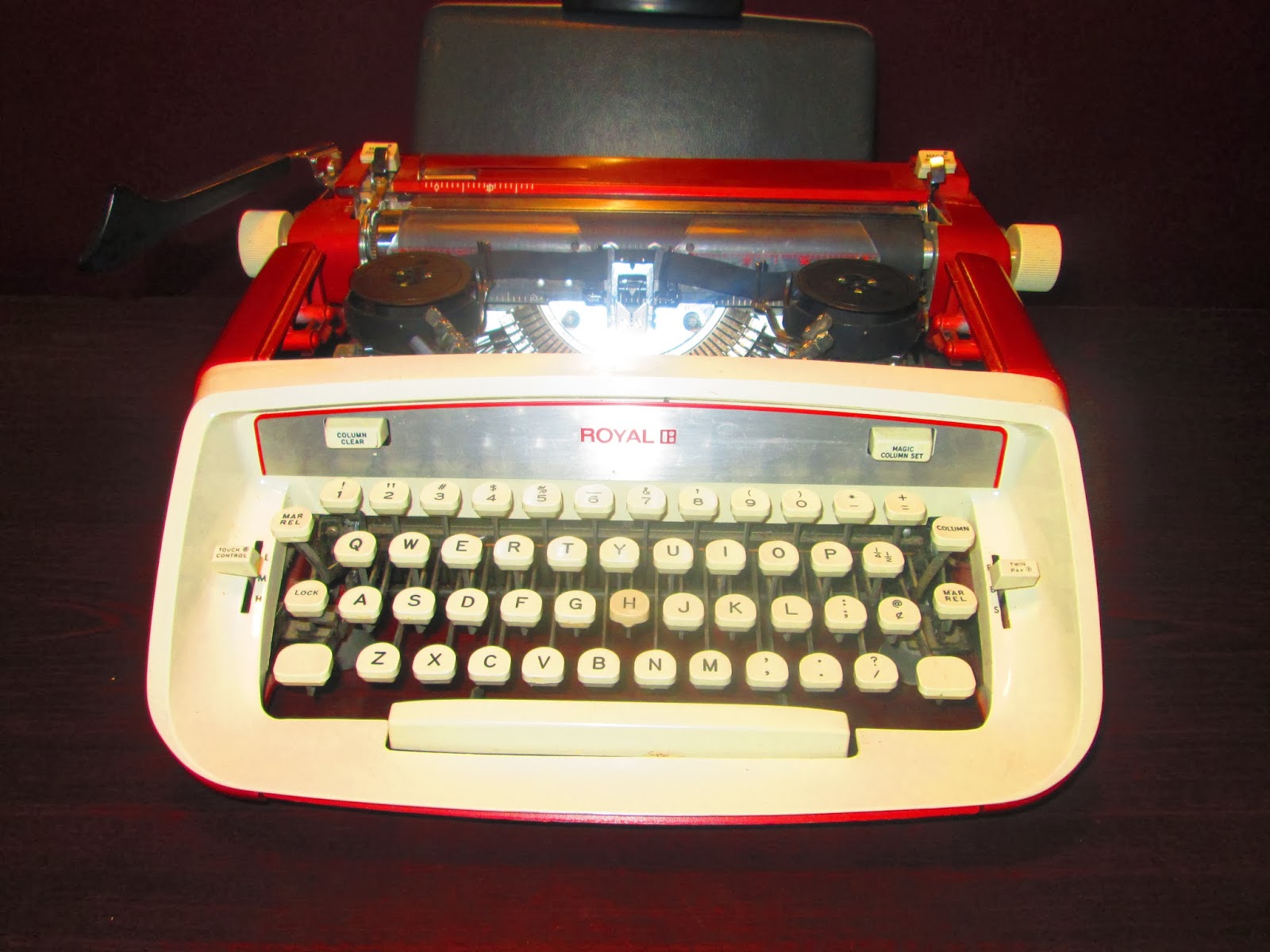 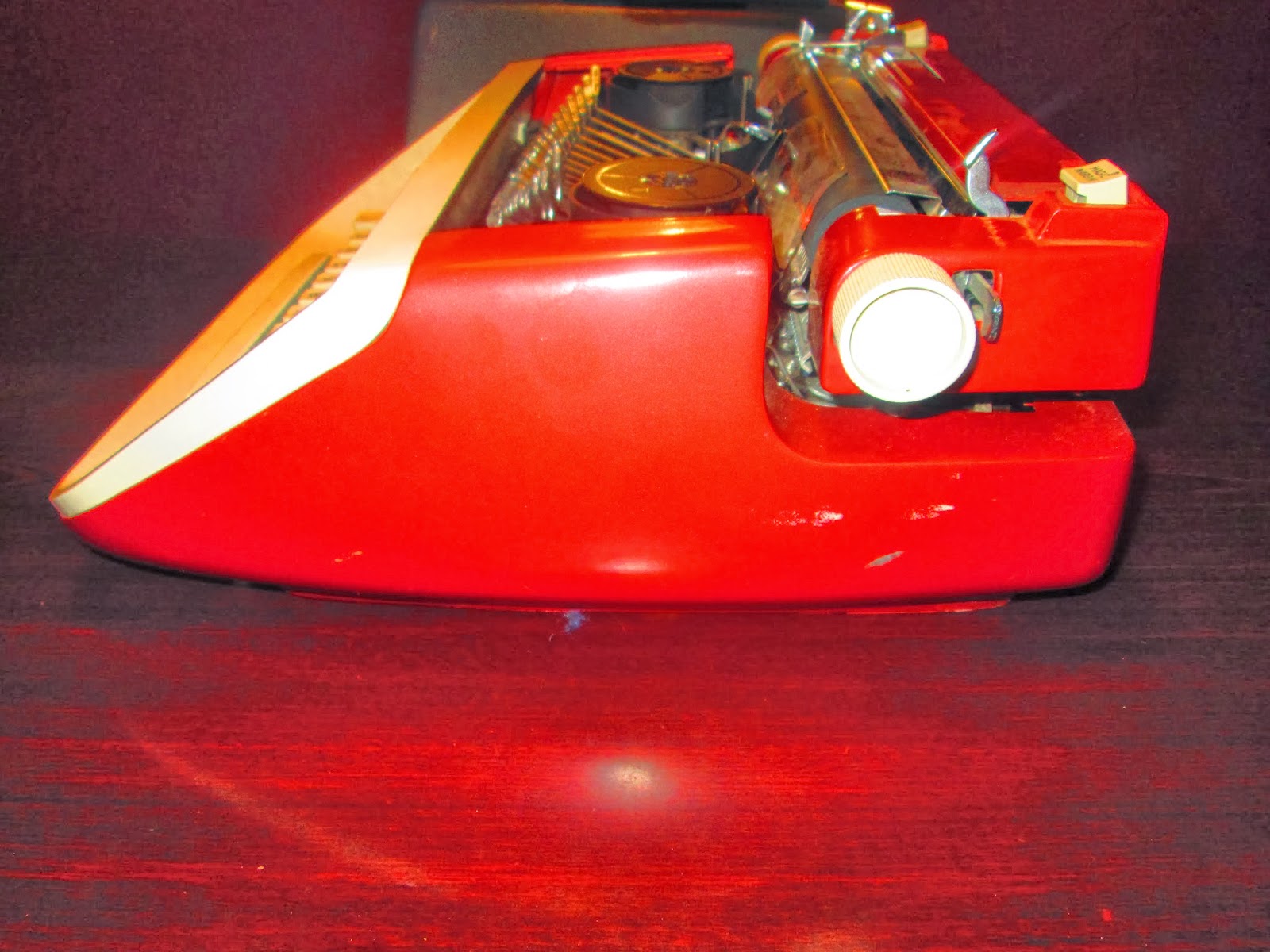 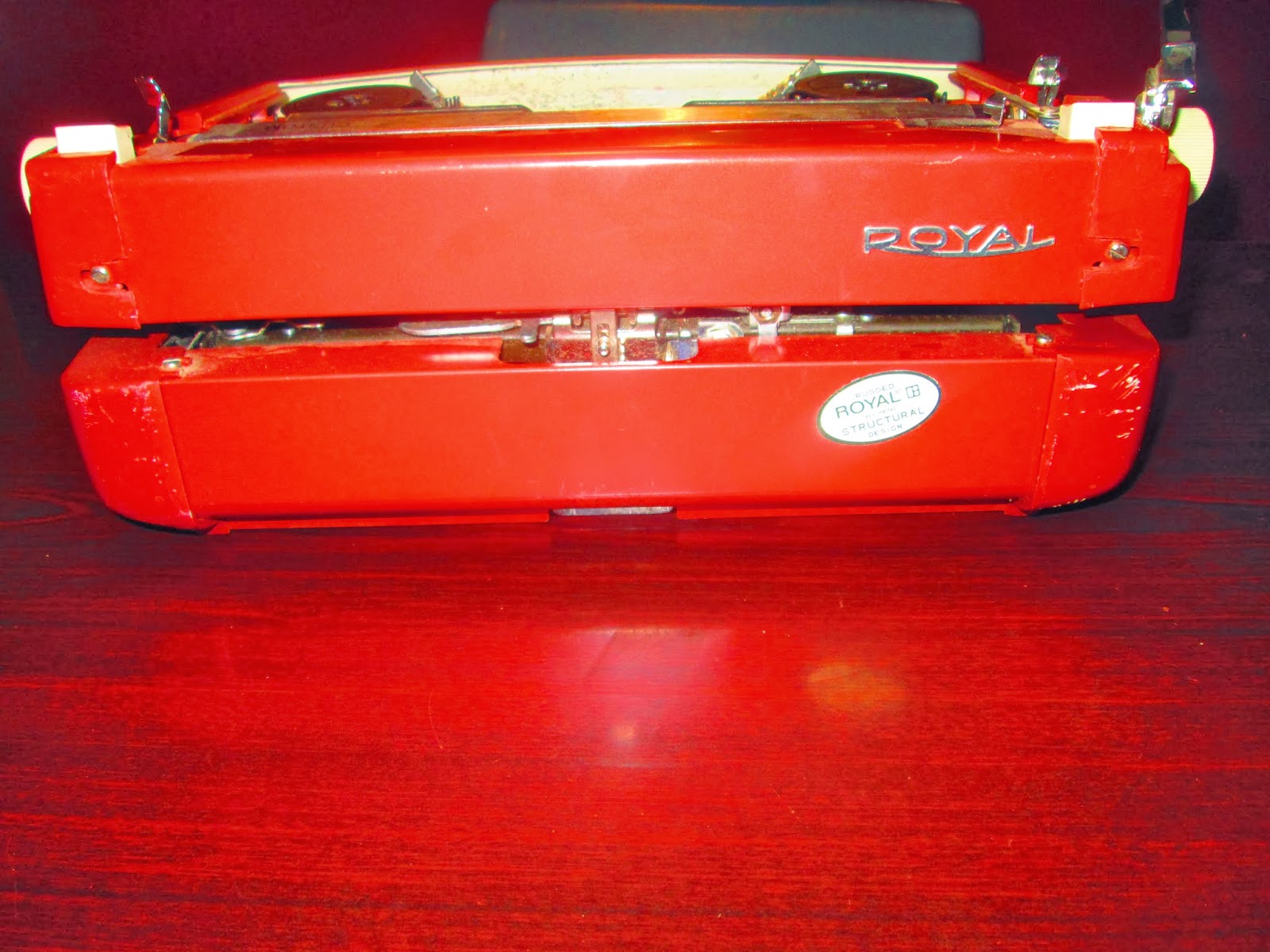 This typewriter was imported by the Associated Merchandising Corporation (now Target Sourcing Services), and was made in France. This typewriter was frequently advertised in the Midwest, but have been known to appear periodically in the Northwest and East. It is part of the Patria Family of typewriters (More info here: www.machinesoflovinggrace.com/ptf/EuropePatriaFamily.html and http://www.typewriters.ch/collection/patria_typewriter.html) Looking at it, three things become clear:

The mechanism inside this typewriter is identical to the Swiss Patria typewriter (later known as the Swissa). This design was used in many European countries:

The mechanism was designed in 1934 by Otto Haas; production began in 1936. In 1944, Max Bill designed a new shell for this typewriter. According to Haas (in 1934), portable typewriters were becoming too large to be portable, and required a specific container to carry them in. He set out to create a compact portable typewriter with many large-machine features. It should be noted that after Haas wrote this, portable typewriters kept getting bigger; the Royal Safari (1962-70) is an excellent example of this--it is almost twice the size of his portable! 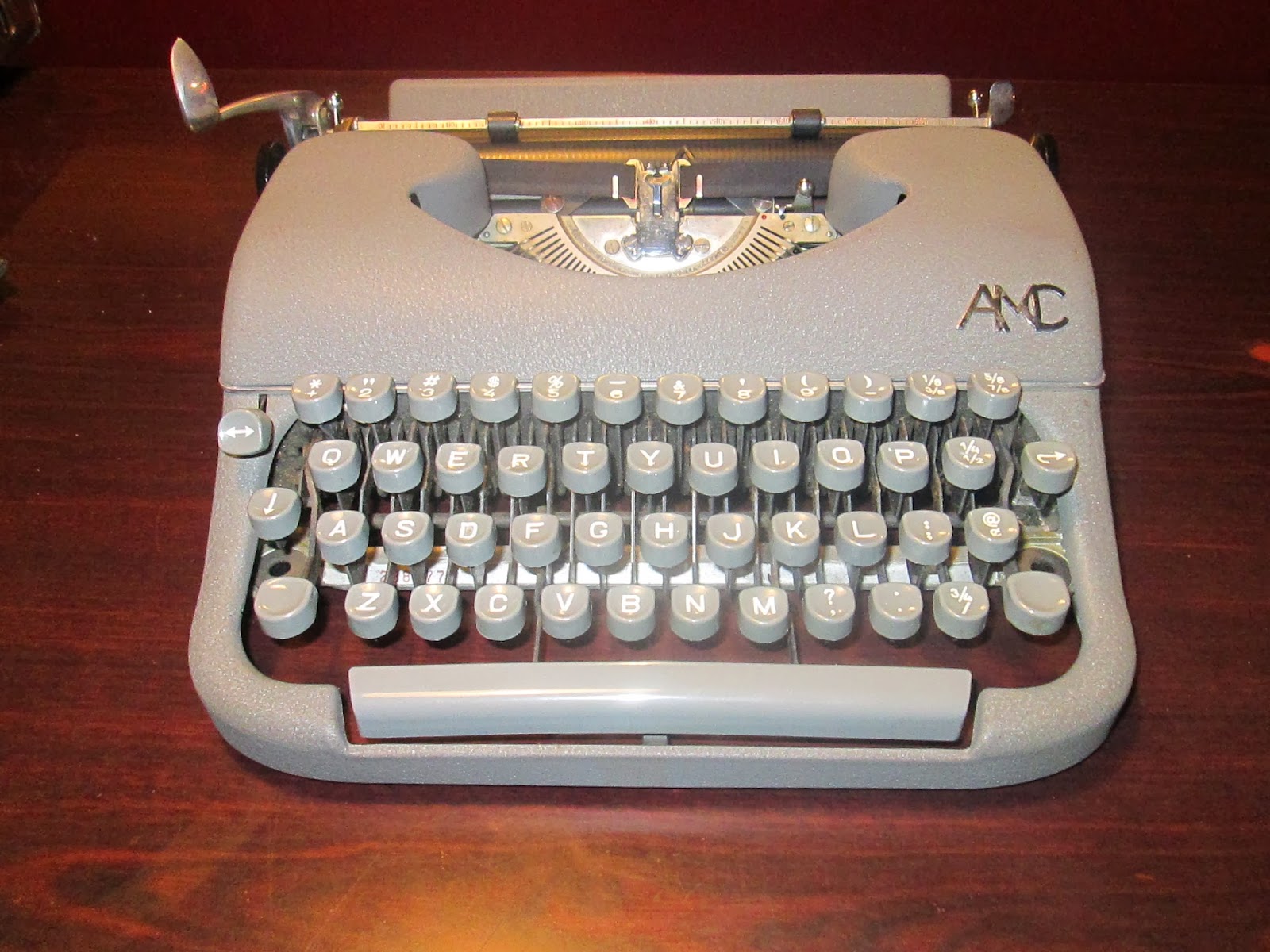 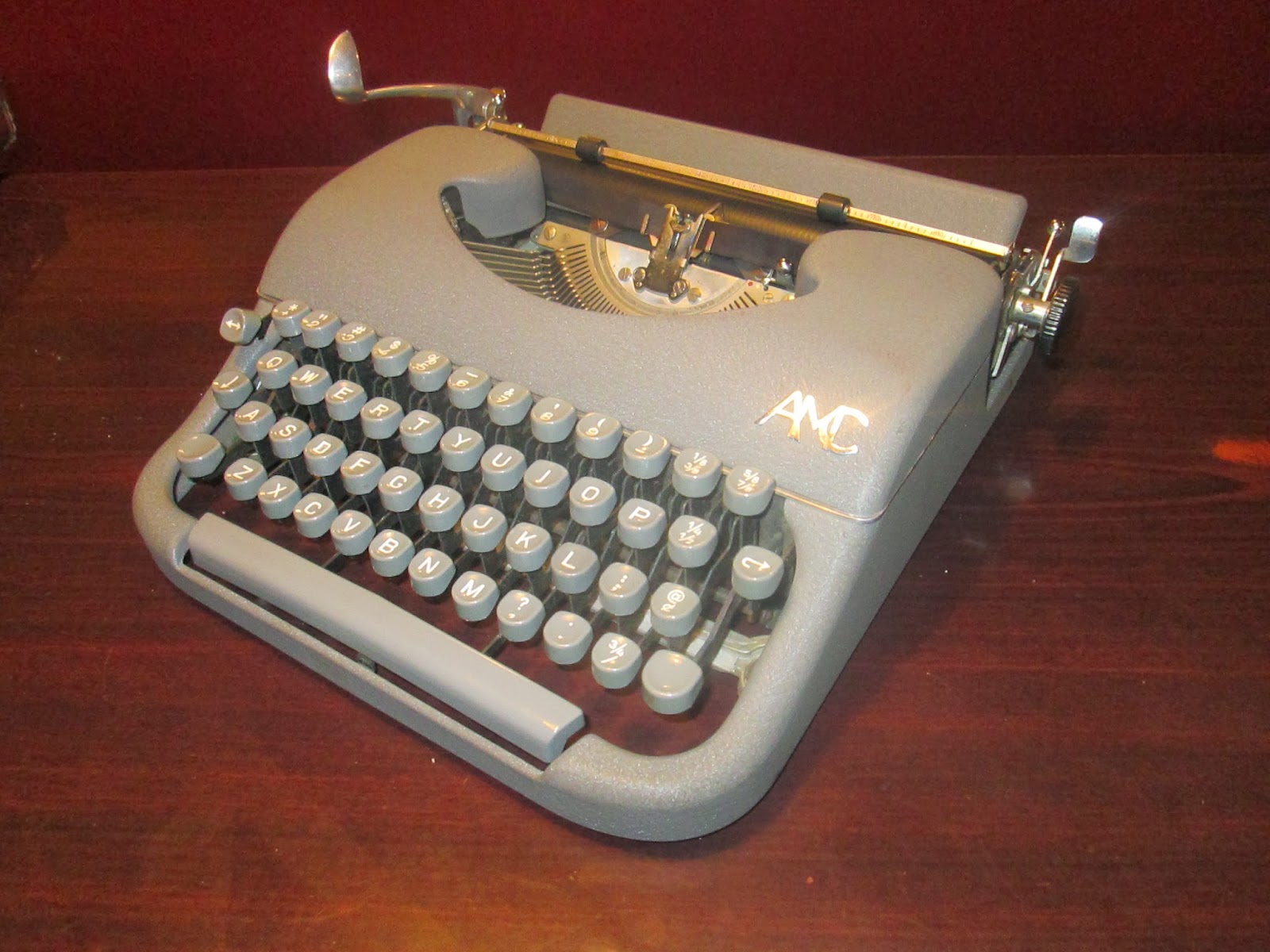 This is a hard typewriter to research. It was made in 1969 by Silver-Reed, and retailed for $39.95. It was rarely advertised. It was one of the lowest-priced typewriters to have a two-color ribbon and a touch regulator. Other than that, the few ads that exist do not lend much information. The carrying case was often described as a "Console Carrying Cover." Mechanically, it is identical to the Royal Mercury, which sold for the same price, but with a white body. The Royal logo on the ribbon cover is raised. The styling of this typewriter reminds me of many 1930s typewriters and architectural details, as well as the Royal Dart. The "Console Carrying Cover" has the word "Century" printed on it in large, factory-painted letters. Even though it is mechanically identical to the Royal Mercury, it rattles much less frequently than the Mercury, and has a better feel to it. The printed work is also much more visible. 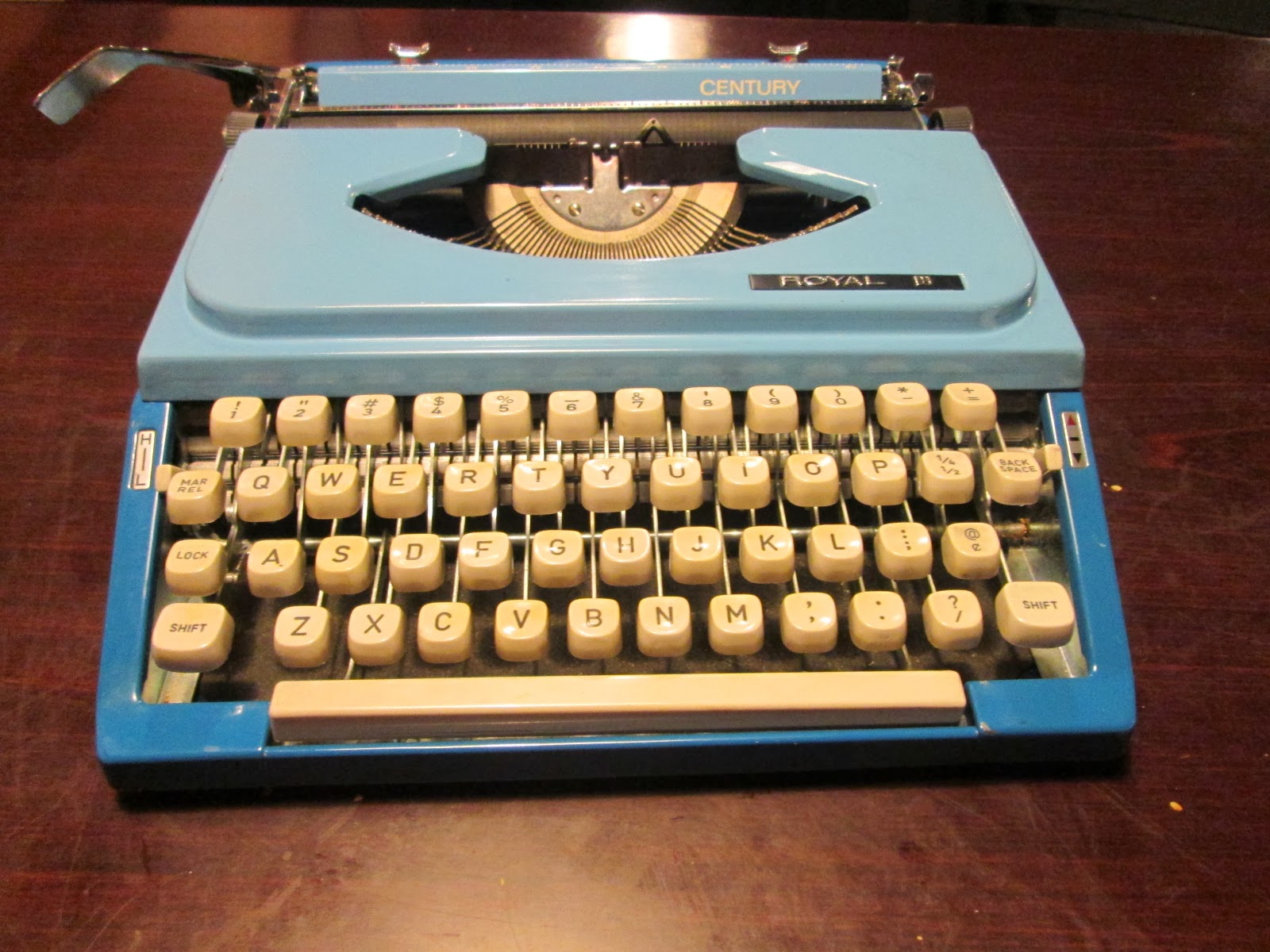 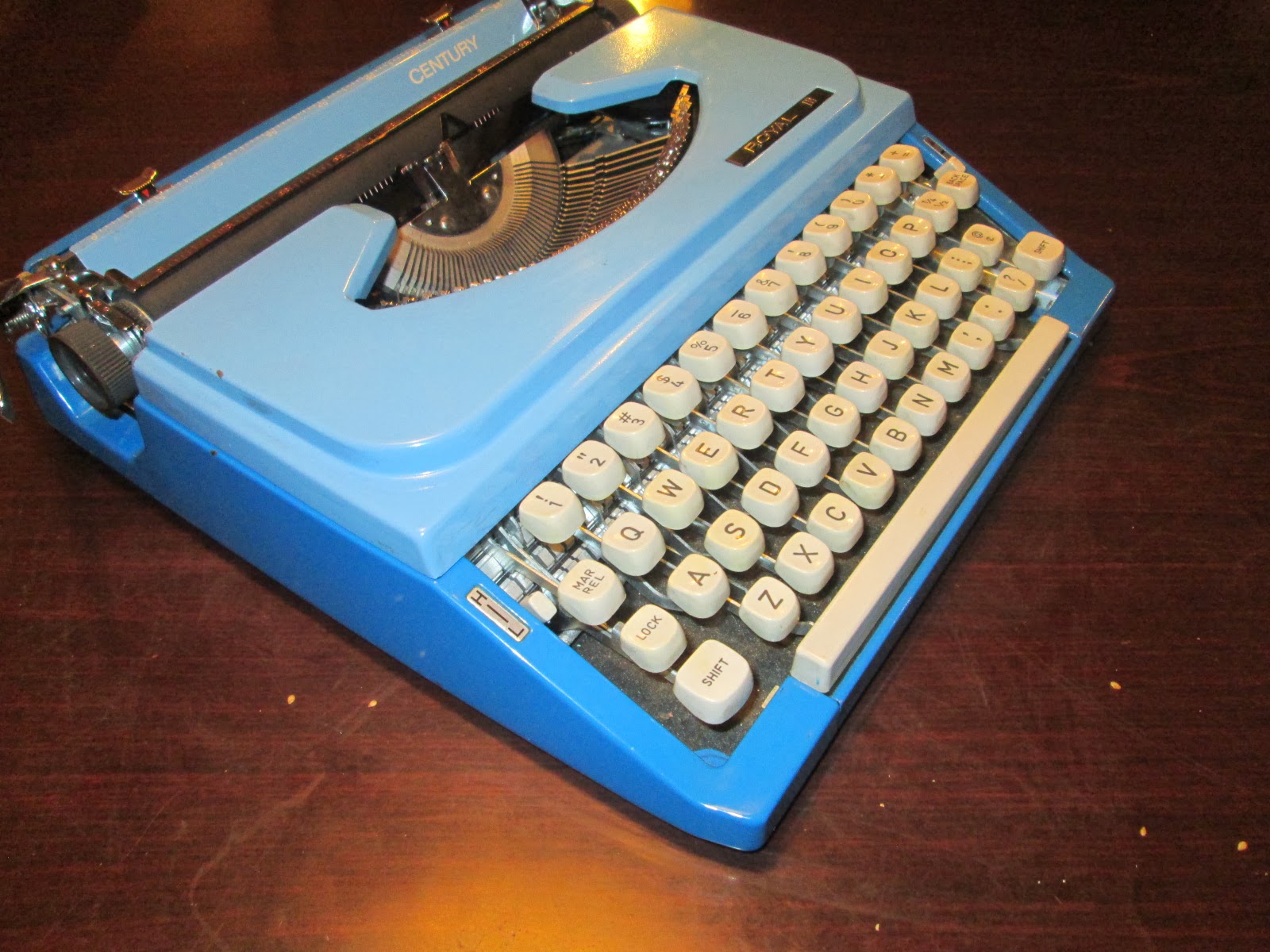 Evolution of the Tower Portable Typewriter 1959-1964


By 1961, the ribbon cover had been changed to a more angular design, with a curved facing. The President XII was renamed "Constellation," and the two-tone color schemes were redesigned. By 1962, a new model, the Citation 88 was introduced, and the chrome-laden carrying case of the  1958-1961 Tower President XII and Constellation models had been replaced with the case that is most familiar to collectors. Known by Smith-Corona as the "Trimline" case, it had a small chrome band in the middle. The case was covered in black or brown vinyl.

Late in 1962, the carriage surround was changed from the 1950s-era metal surround that was seen on the Silent-Super, to the 1960s-era plastic surround that was seen on the Galaxie. This feature would remain unchanged until the mid-1970s, when Smith-Corona stopped making typewriters for Sears. In the 1964 catalog below, the Constellation has been replaced by the Sears President 12. This typewriter was painted black, with a brushed stainless steel front panel, similar to that on the Tower Constellation. It was the first Sears typewriter to offer Changeable Type. Mechanically, it is a Smith-Corona Classic 12.

Basically a Brother Charger 11 with a tabulator, this would have to be my favorite new acquisition. It is lightweight, yet a great performer, and has the original stickers and manual! It was designed in 1961 by Akio Kondo. His design was used until the mid-1980s. This typewriter is carriage-shifted, and has a pop-up paper support. Its serial number indicates that it was made in November, 1966. The Echelon 66 was a relatively inexpensive typewriter, often sold by discount stores such as Valu-Mart (a Seattle-based subsidiary of Weisfield Jewelers), Villa-Mart (the Portland, Oregon, equivalent of Valu-Mart)  for roughly $45. (They listed a comparable value of $80; the question that arises is: was the basis of the "comparable value" a Brother, or a more well-known portable?)

This typewriter is painted in Brother's initial color offering; the first Brother portable was painted this shade of gray. It also has the first type of case handle. It also may have its original ribbon spools. (I spooled a Point of Sale ribbon onto them 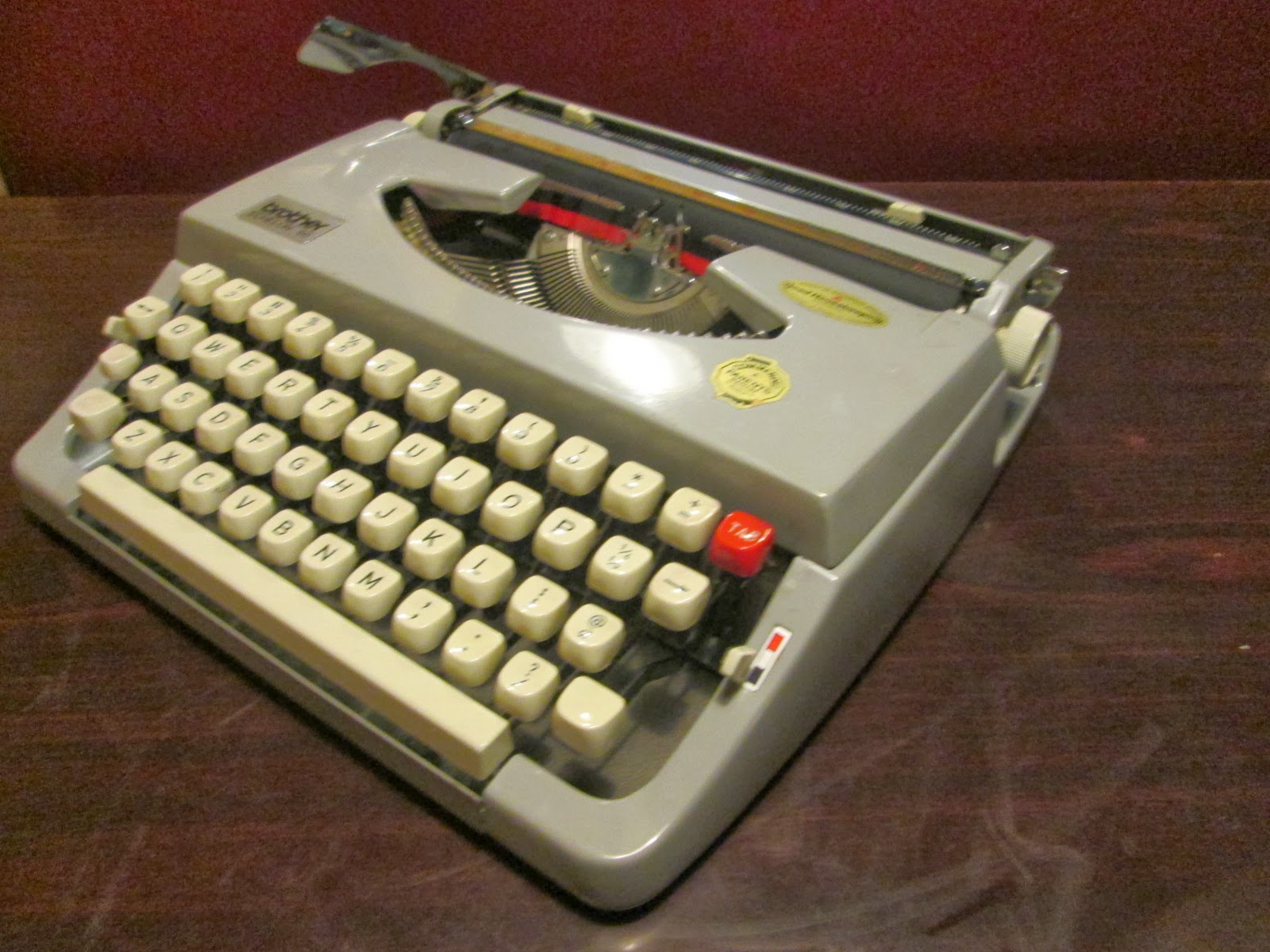 The bright red key is the preset tabulator. 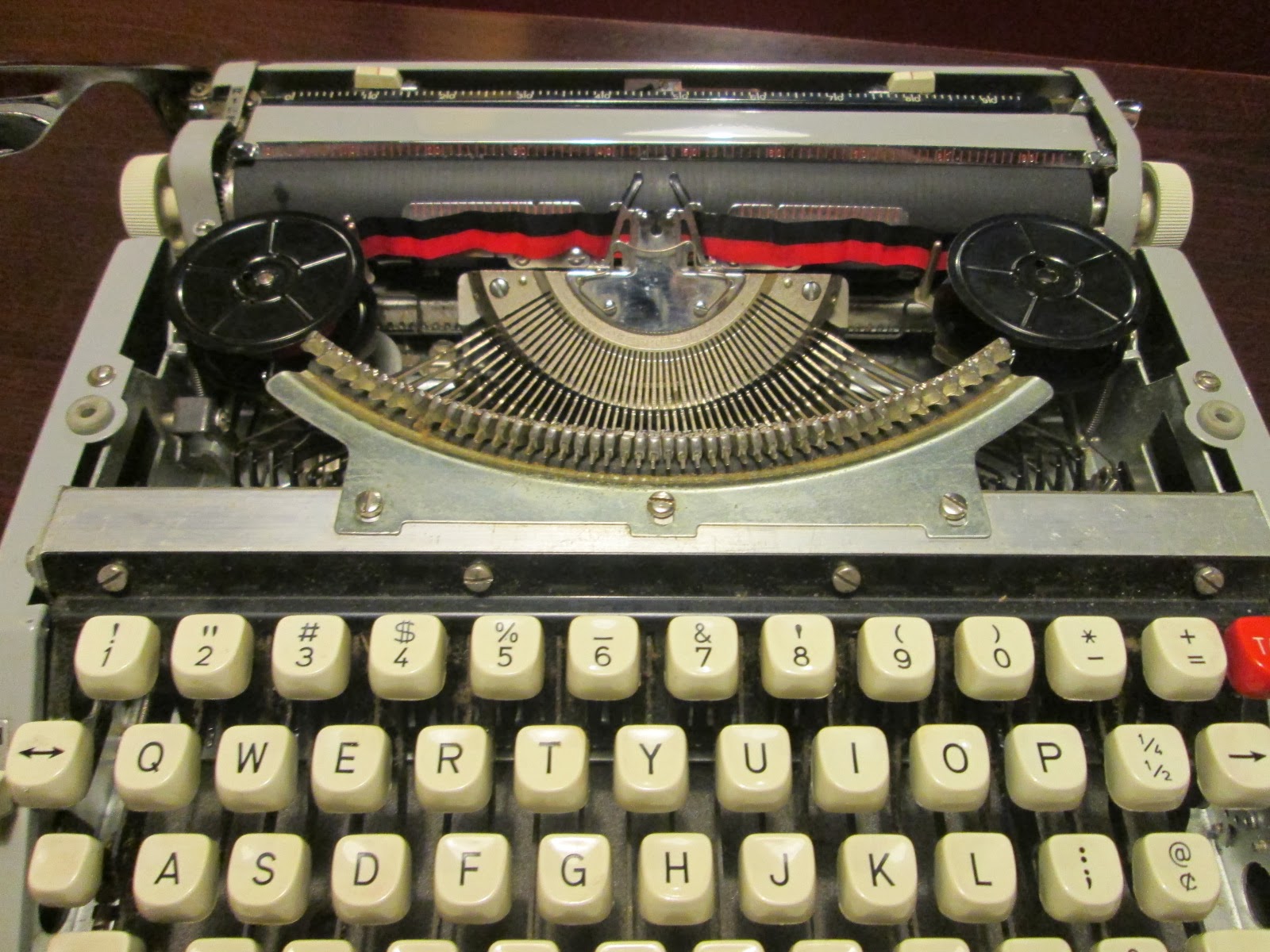 These spools look like they were original to the machine--I have never seen ribbon spools that were stamped like this. 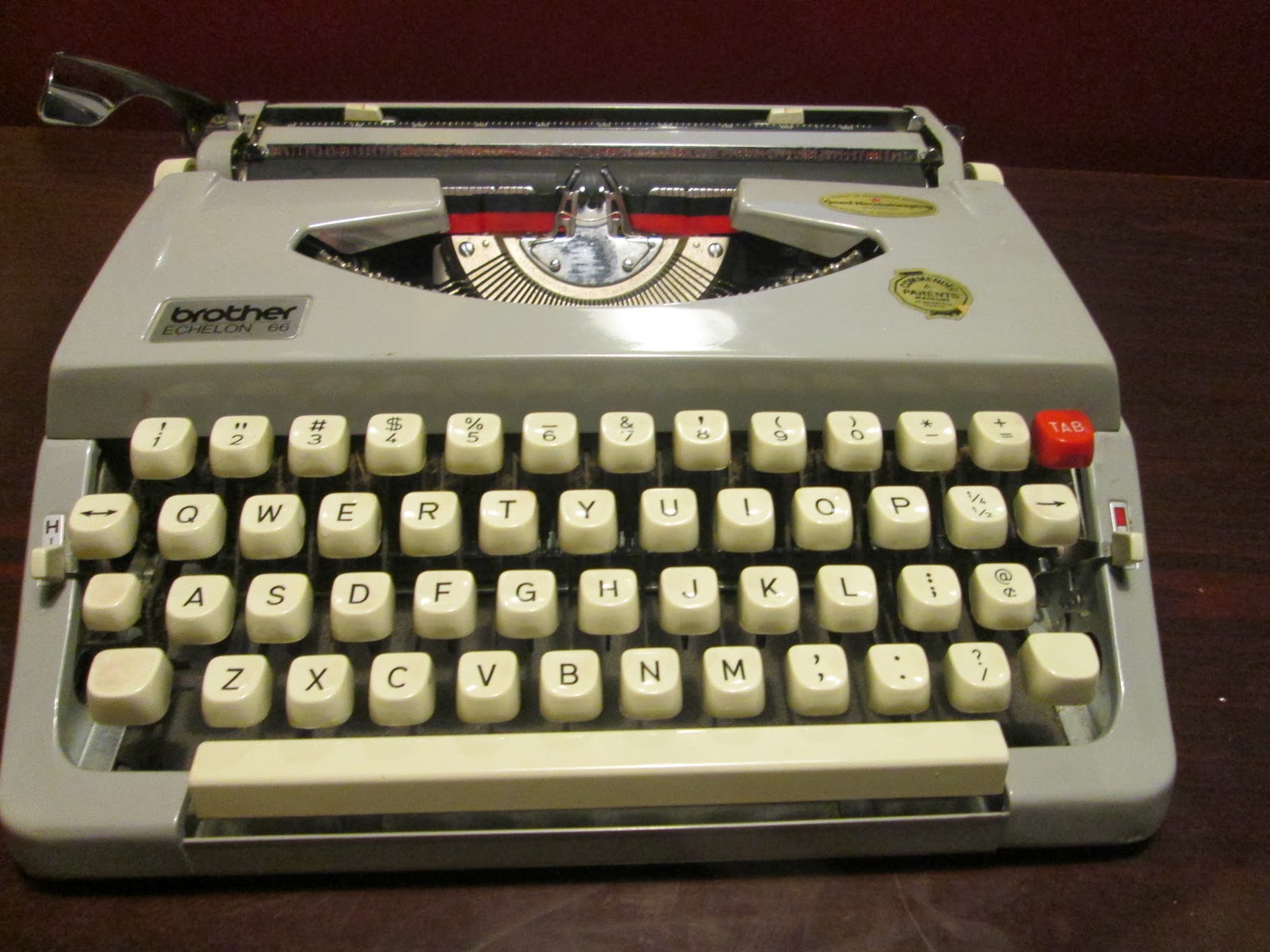 Notice the gold labels on the ribbon cover--the top one indicates that Good Housekeeping guaranteed this typewriter; the bottom one is Parents' Magazine's seal of endorsement. 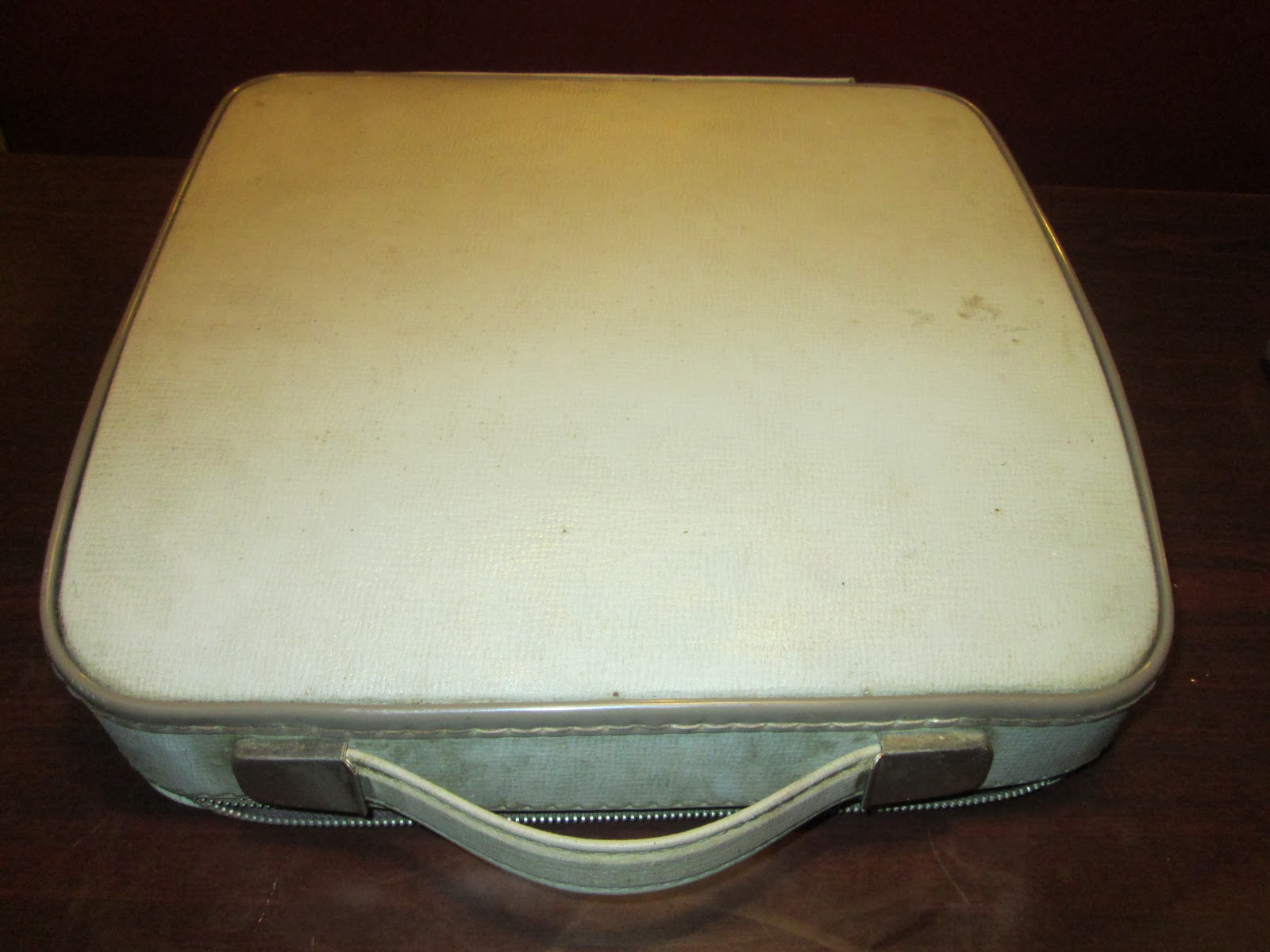 The case below was only used between 1941 and 1942, and is usually seen with a tan typewriter inside. 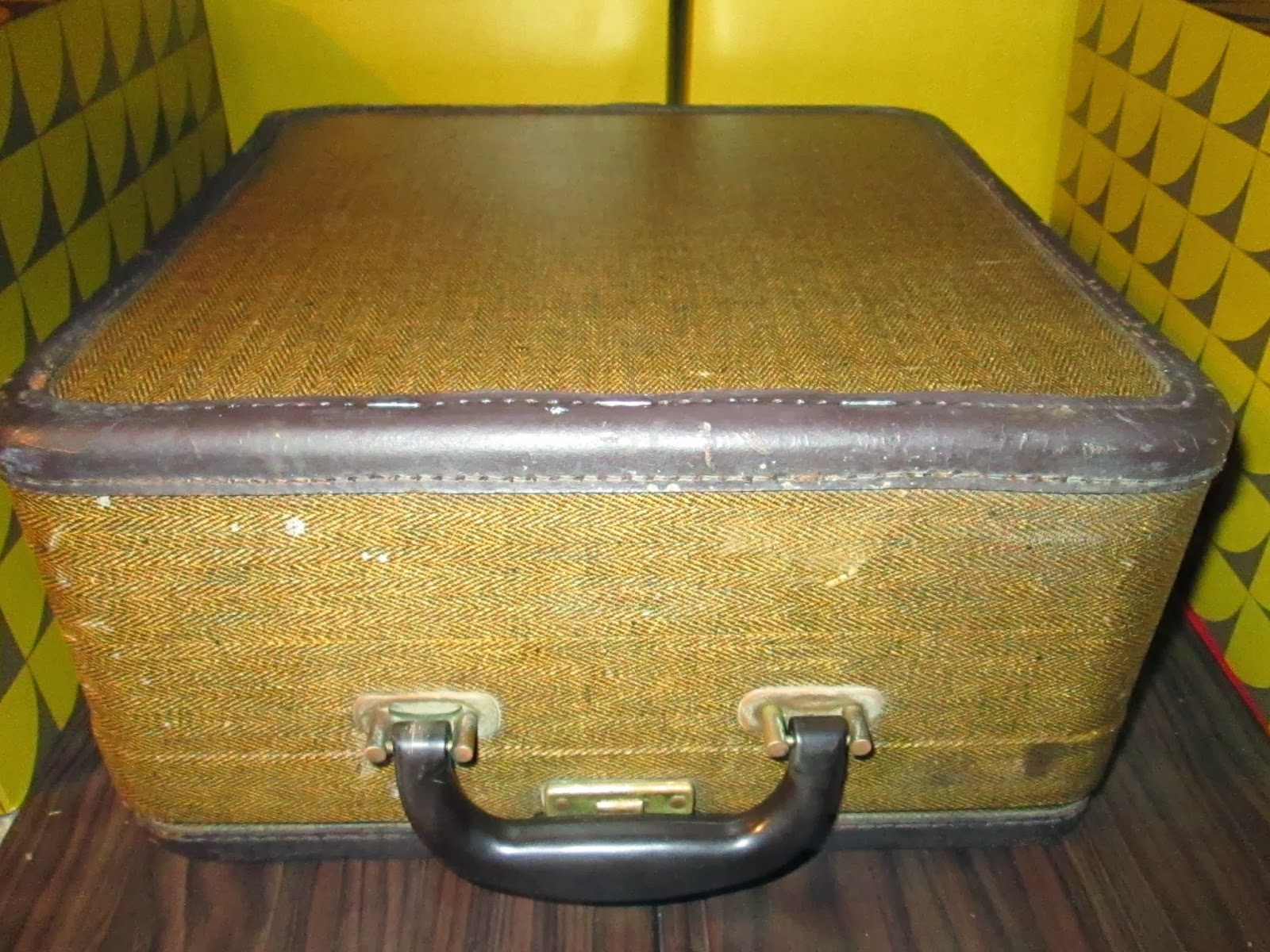 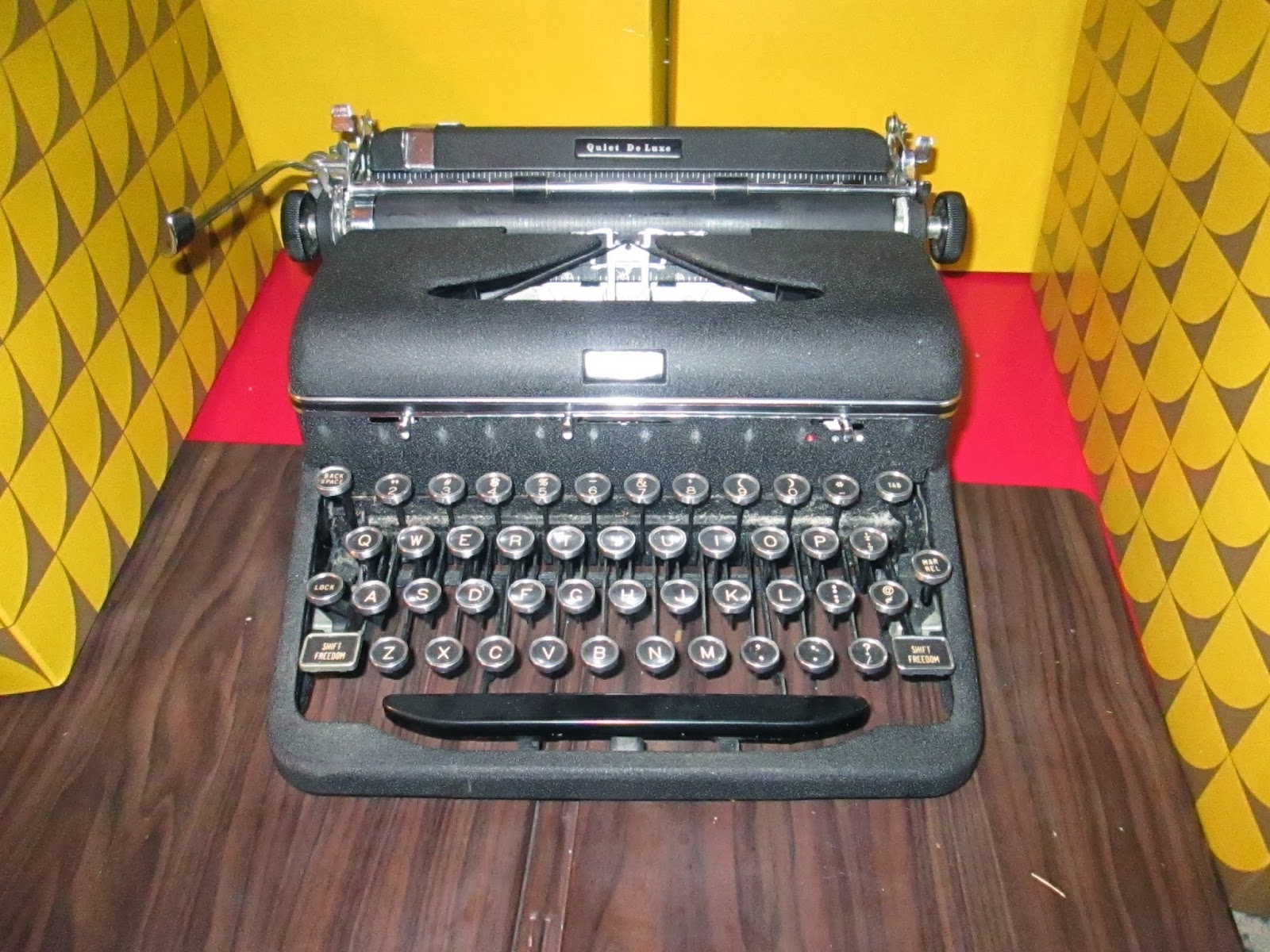 1970 Royal Fleetwood in its Natural Habitat 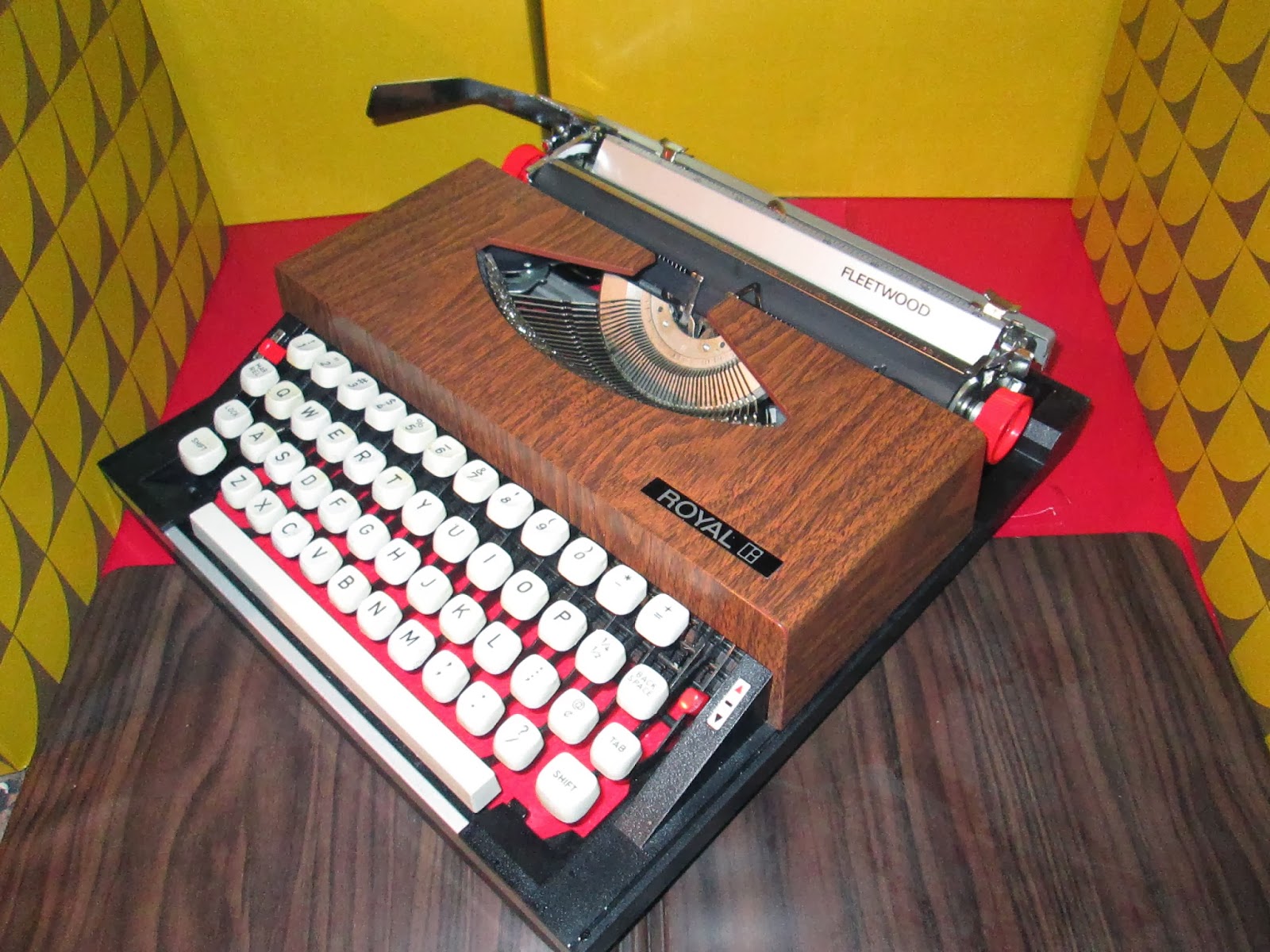 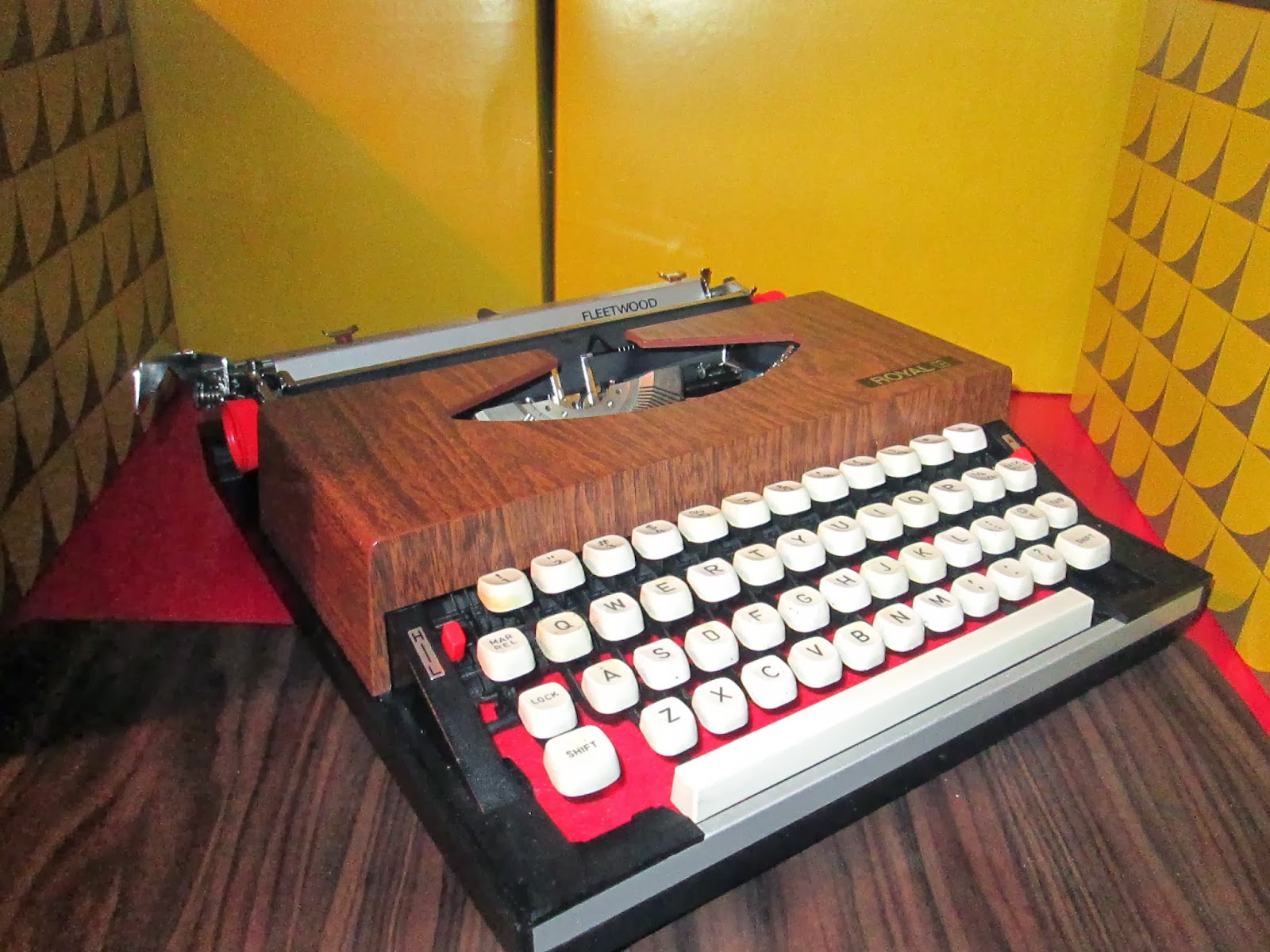 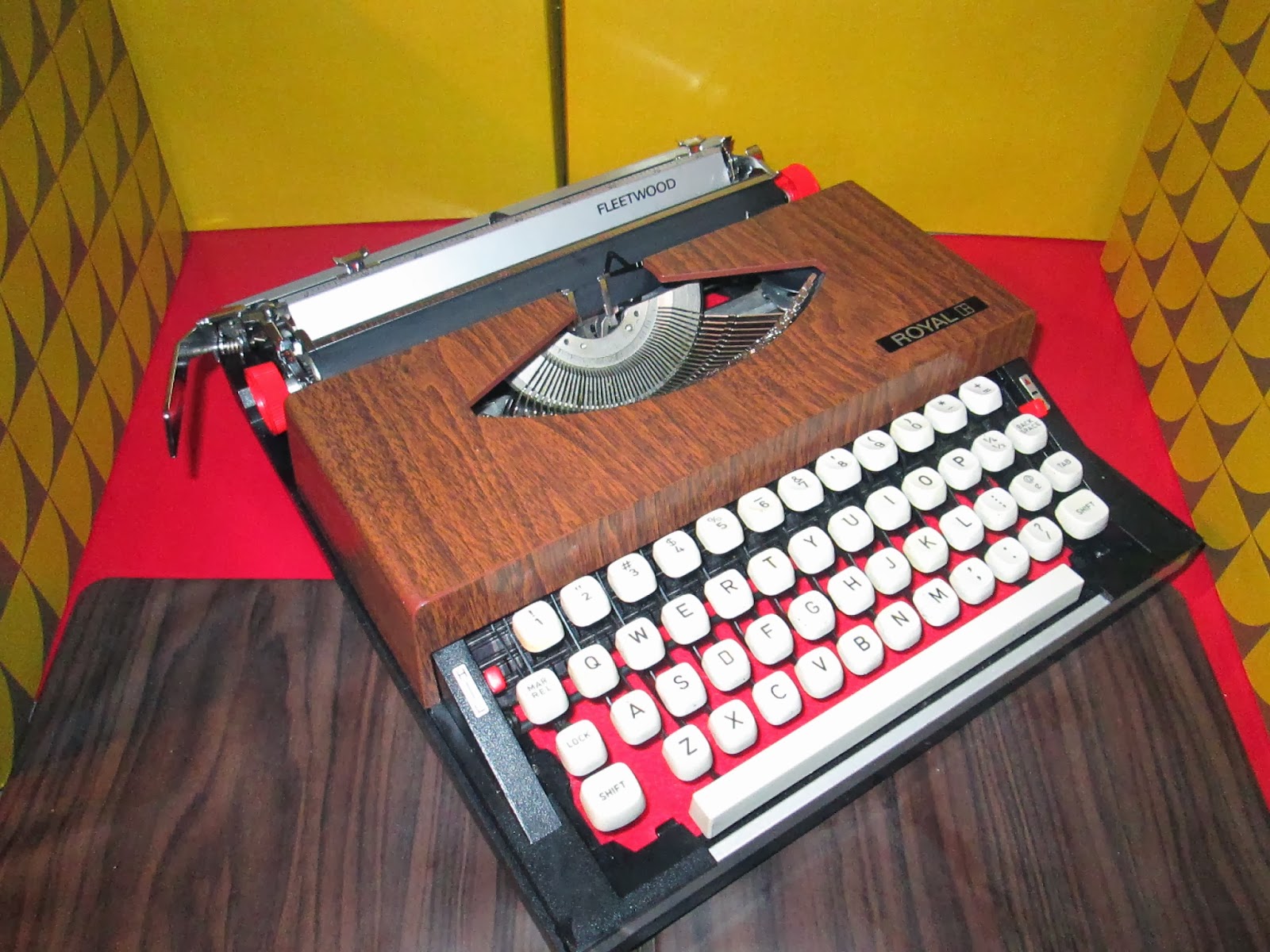 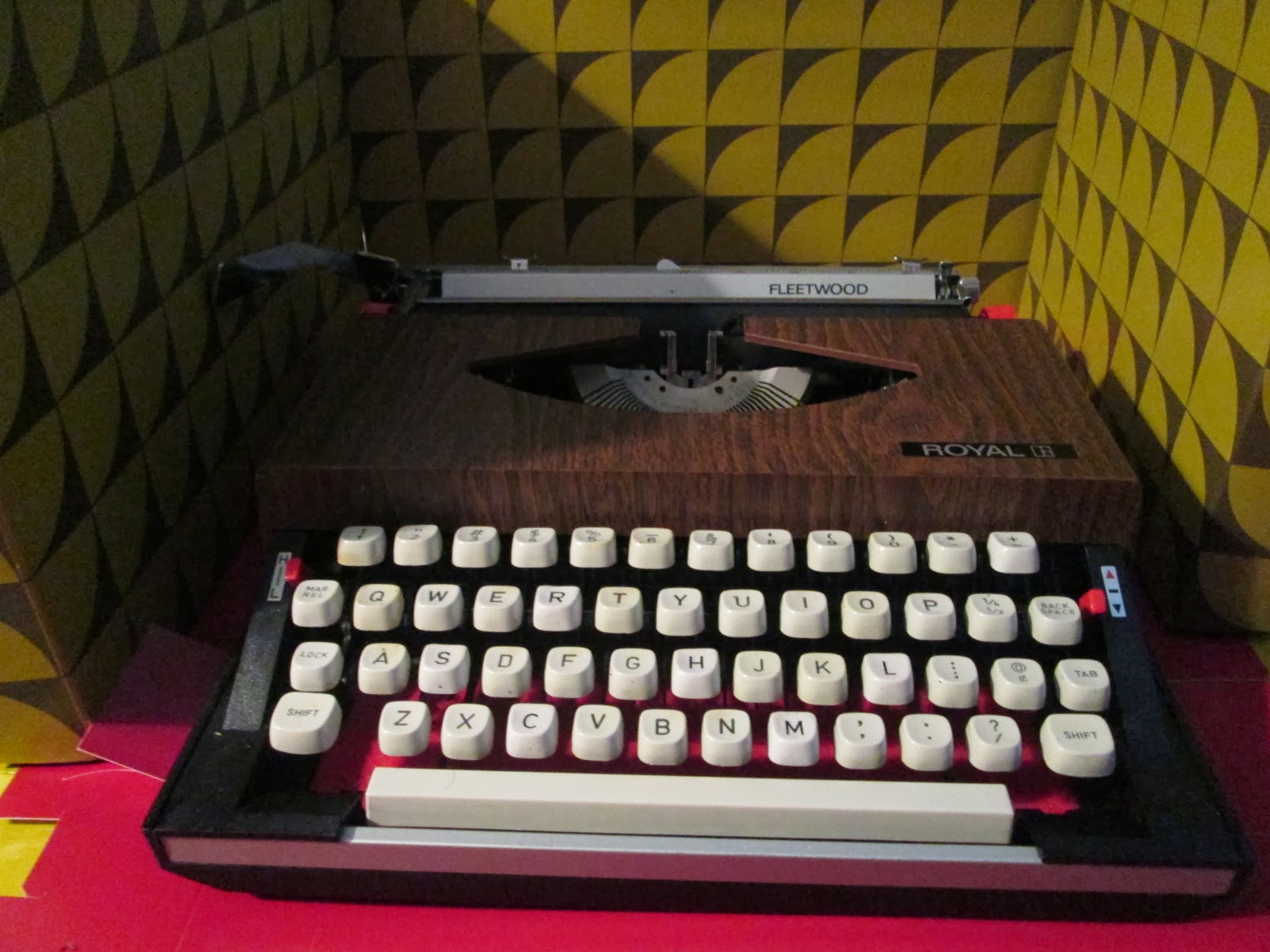 I bought these boxes at an estate sale, and realized how well they would go with typewriters. All of the boxes are from The Bon Marche, from the years between 1960 and 1990. The red floor is a Bon Marche box lid, the yellow and brown ones are from the mid 1970s. The woodgrain texture is a vinyl clipboard. The typewriter was originally sold by The Bon Marche, in Seattle, WA. It was by no means a sales success (see http://royaltypewriters.blogspot.com/2013/12/avona-jet-circa-1962.html) being sold frequently on clearance. 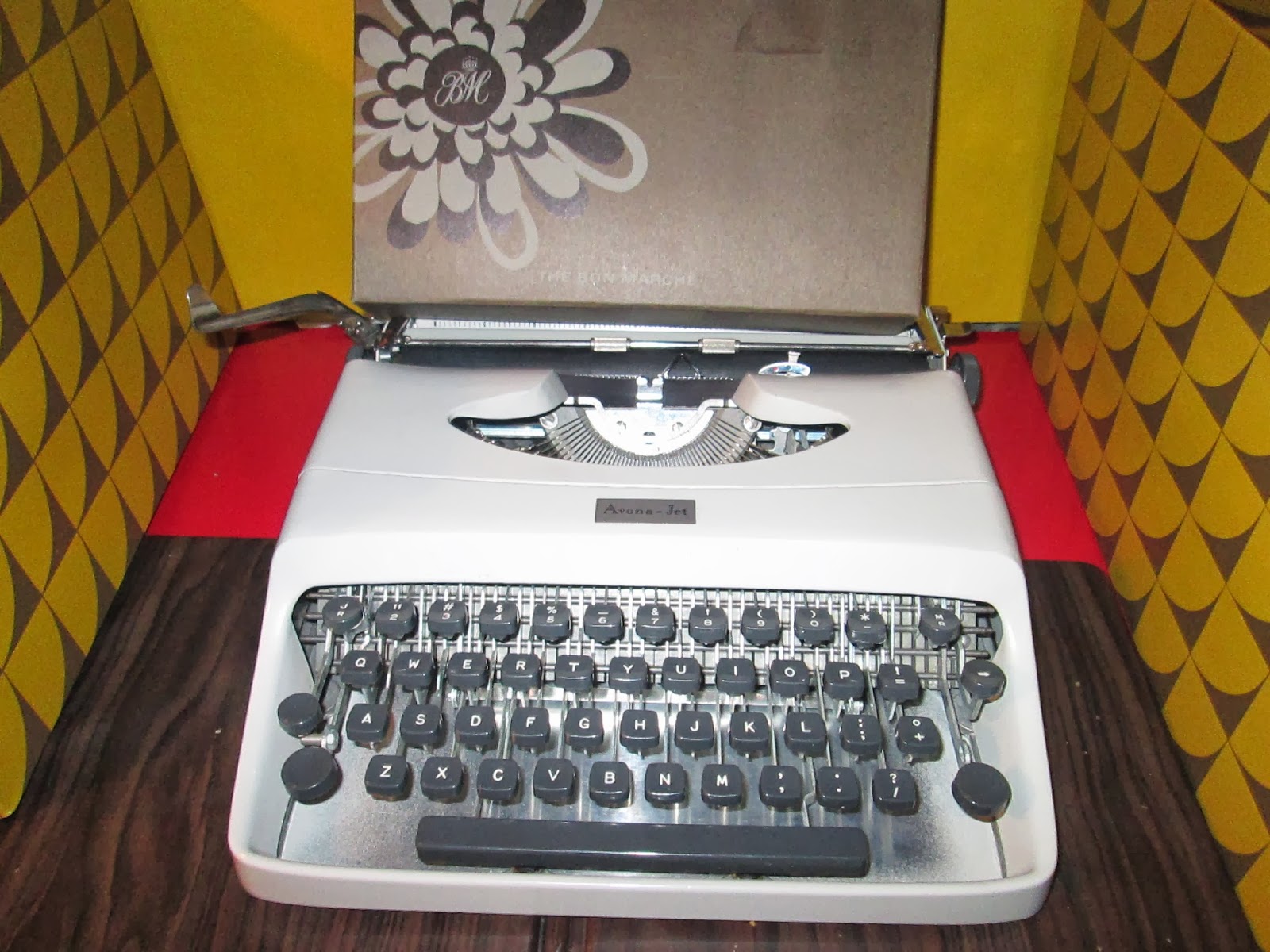 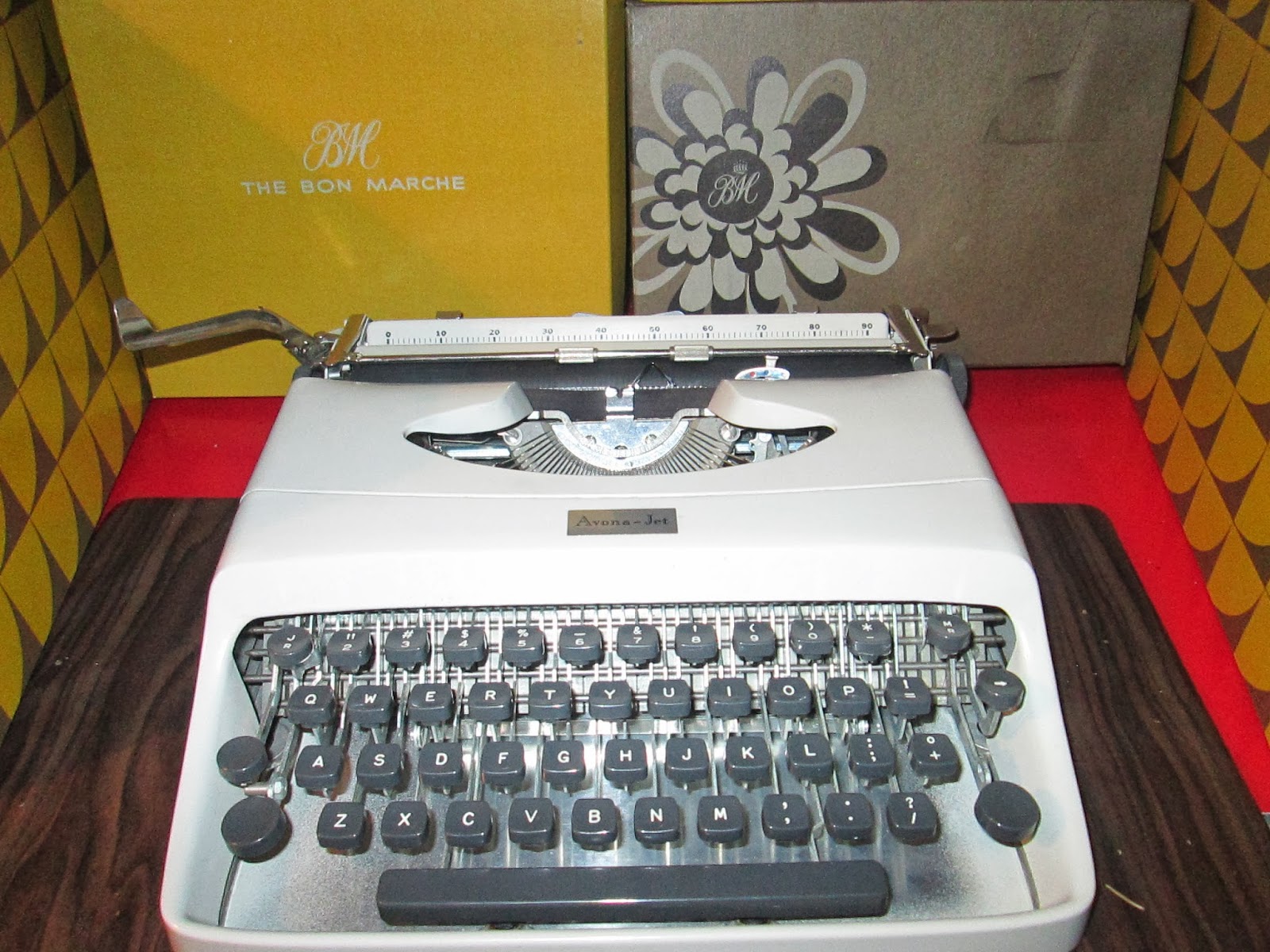 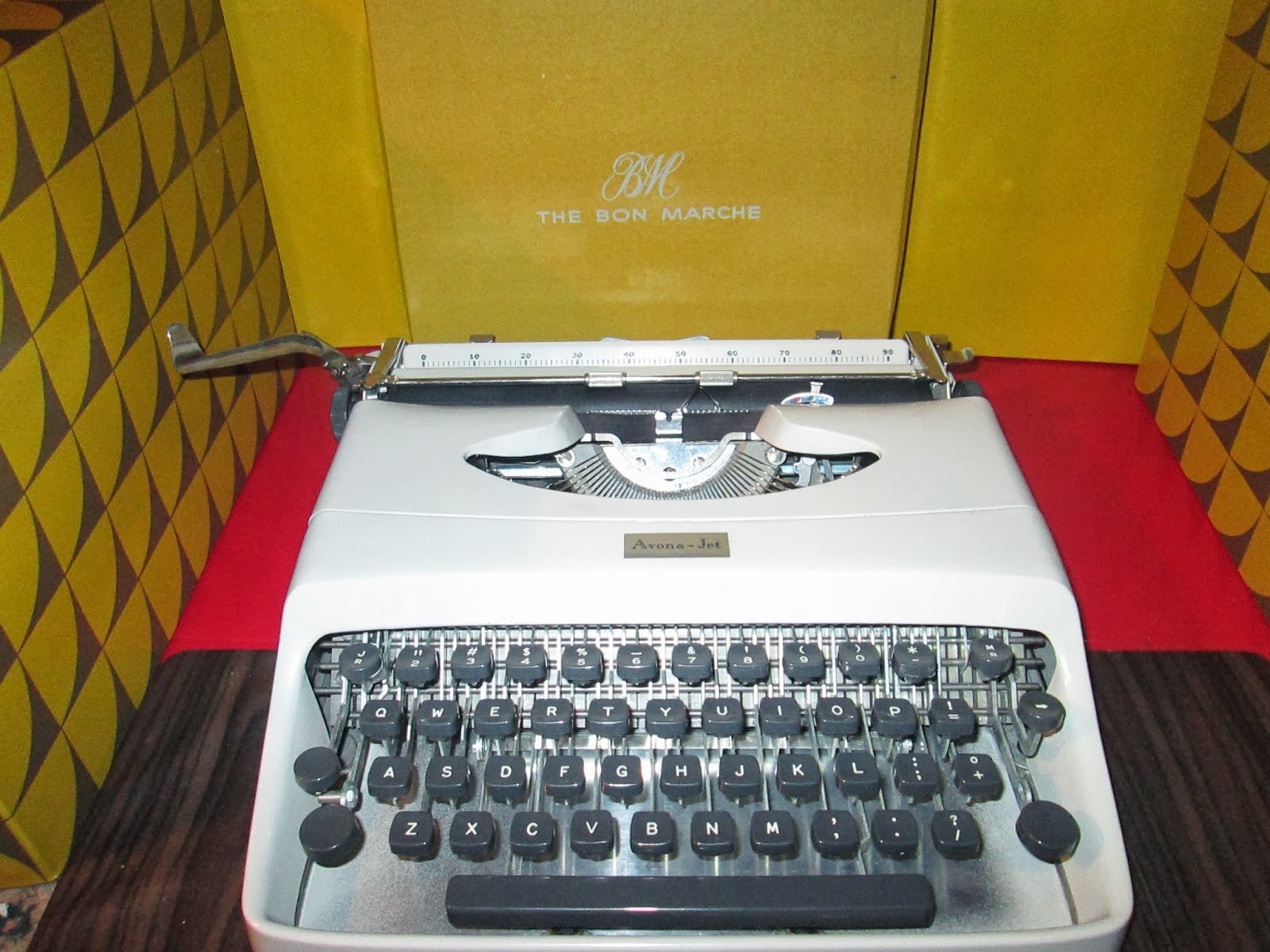