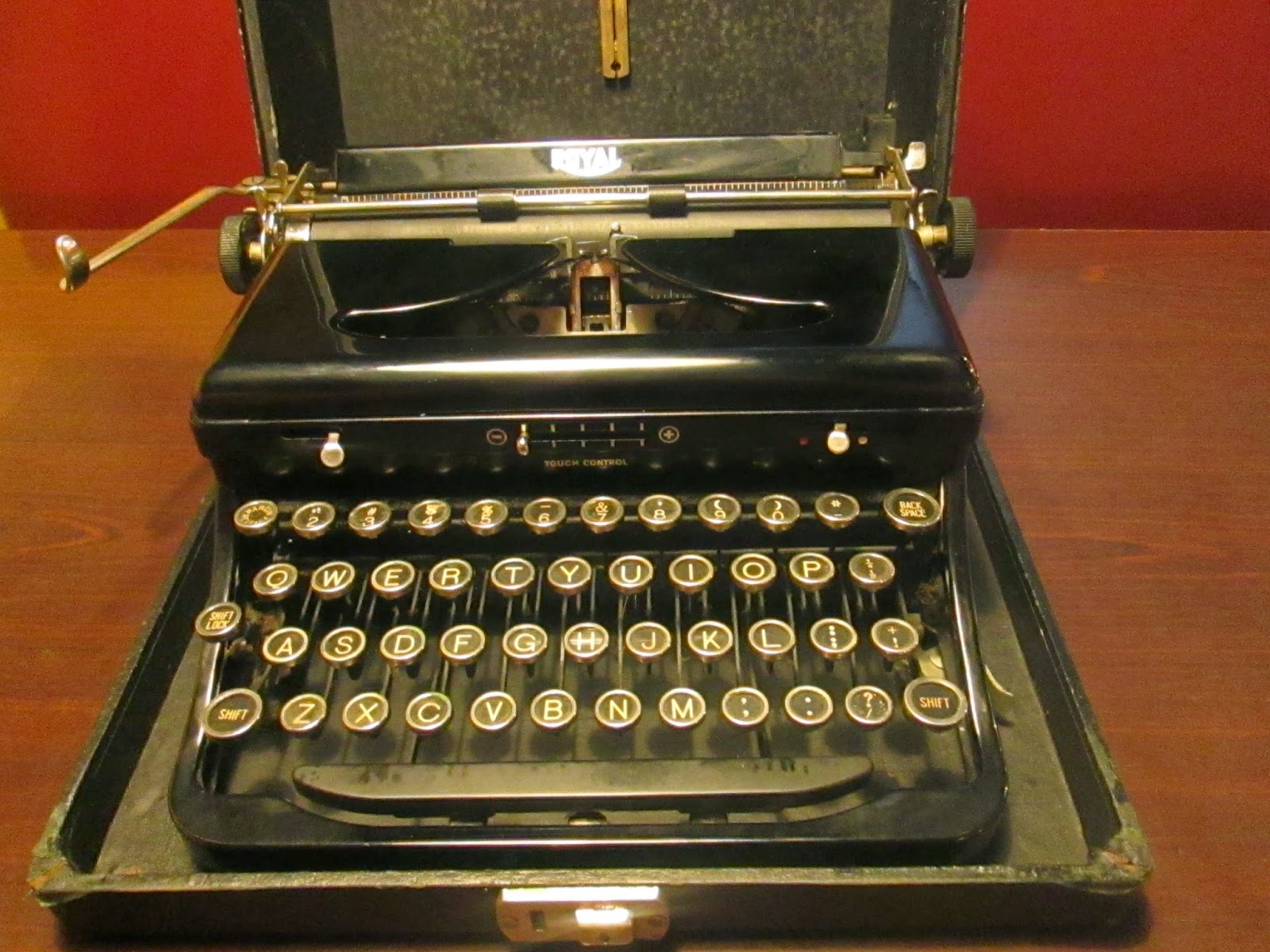 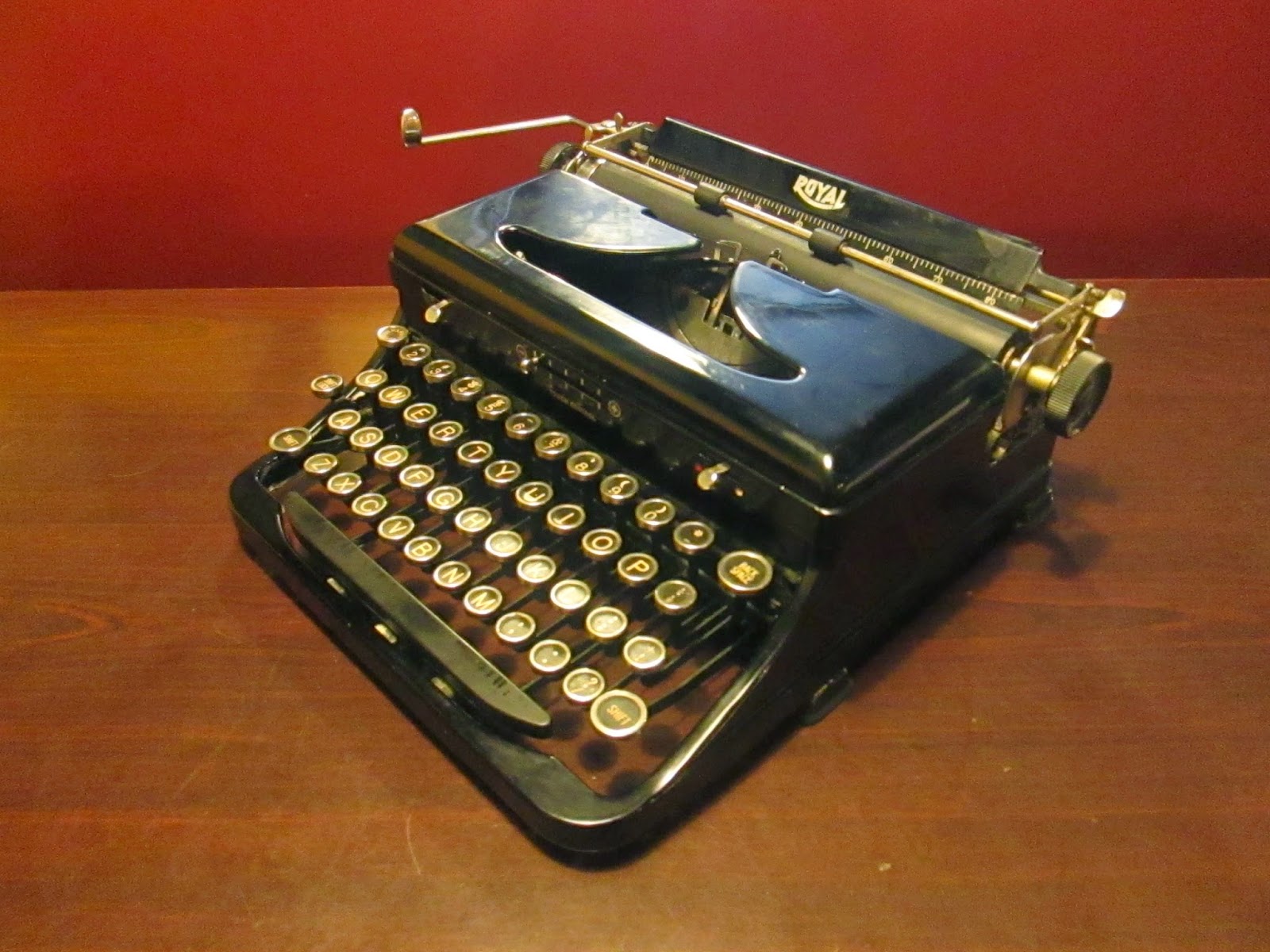 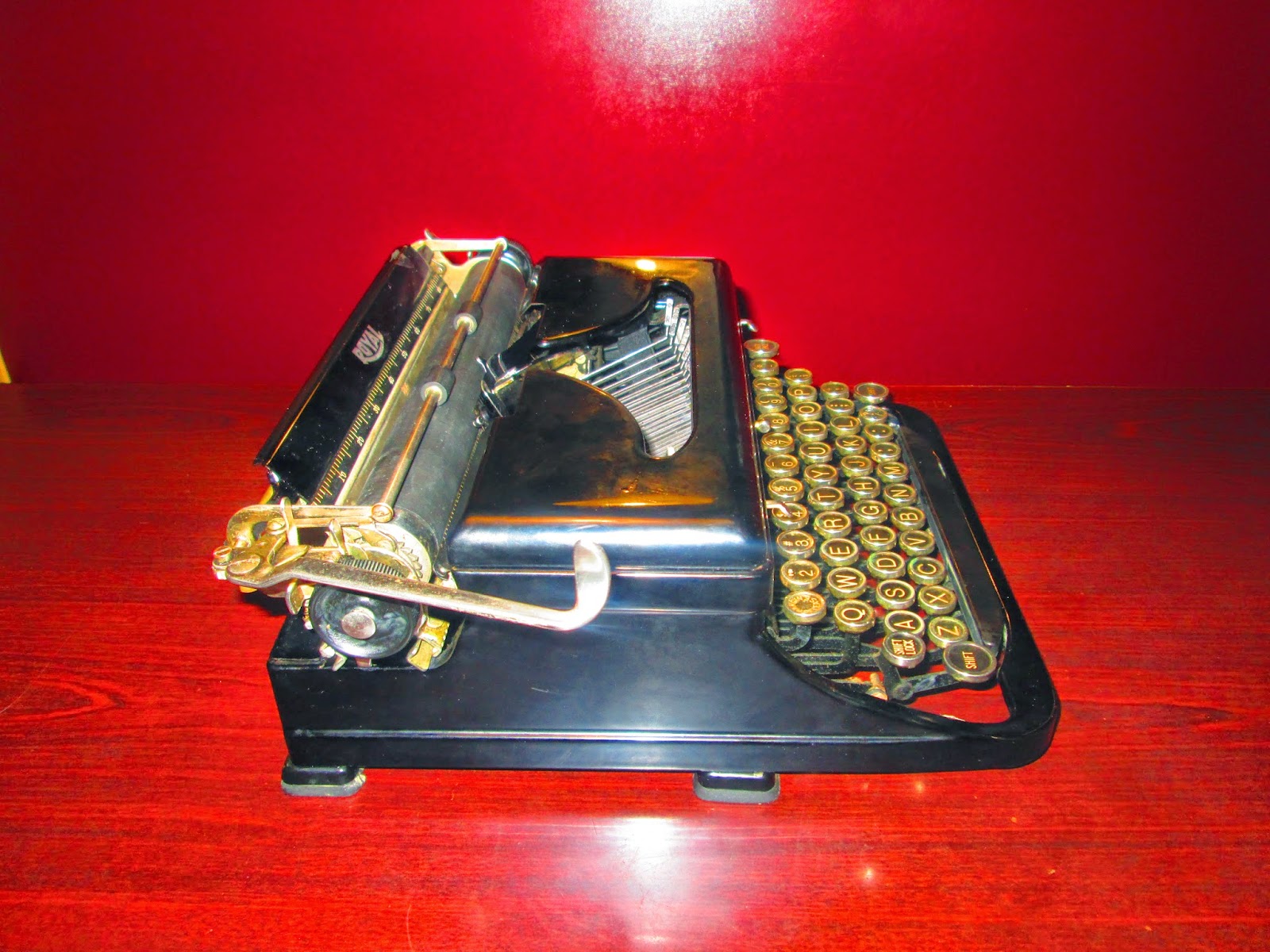 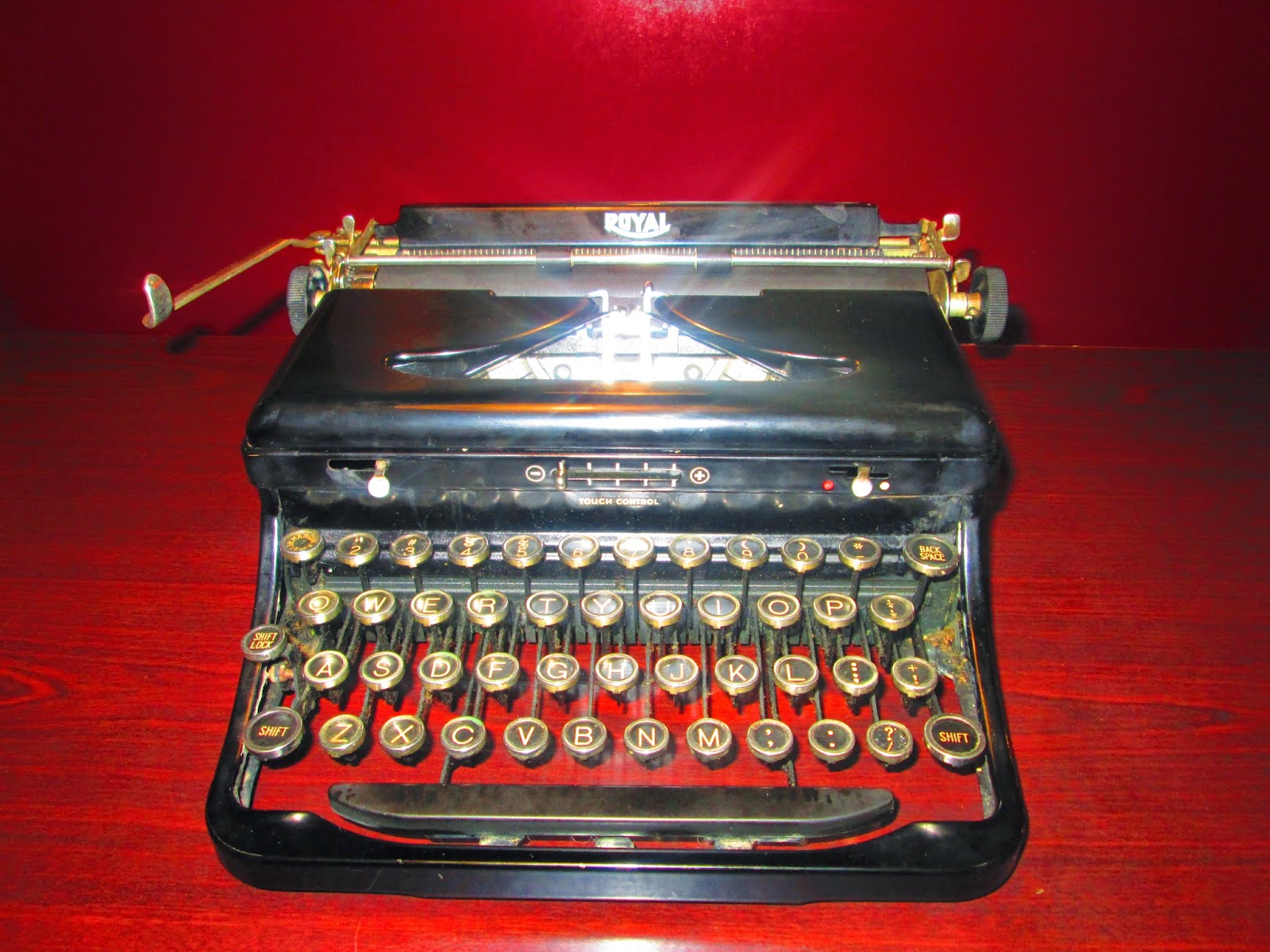 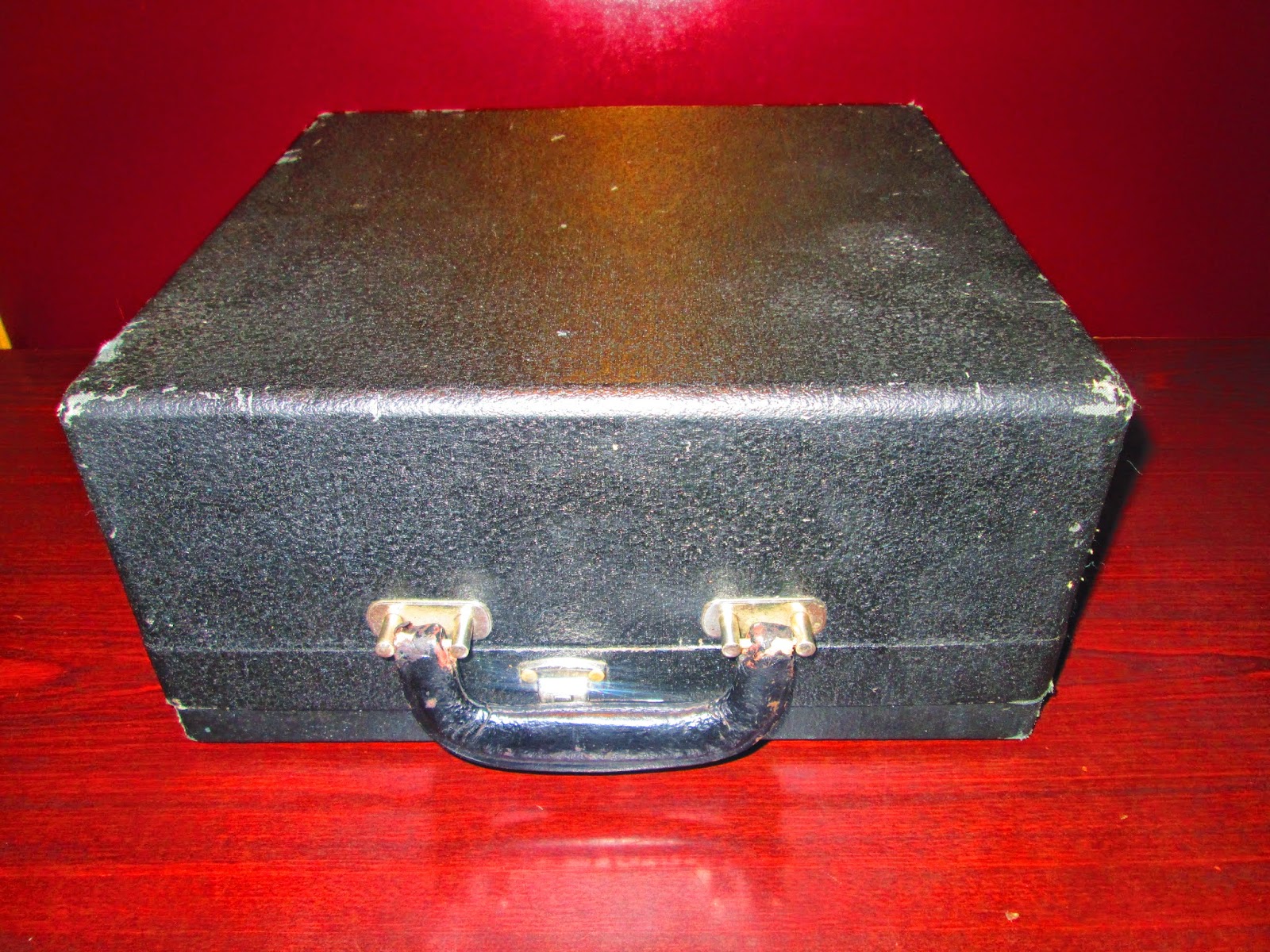 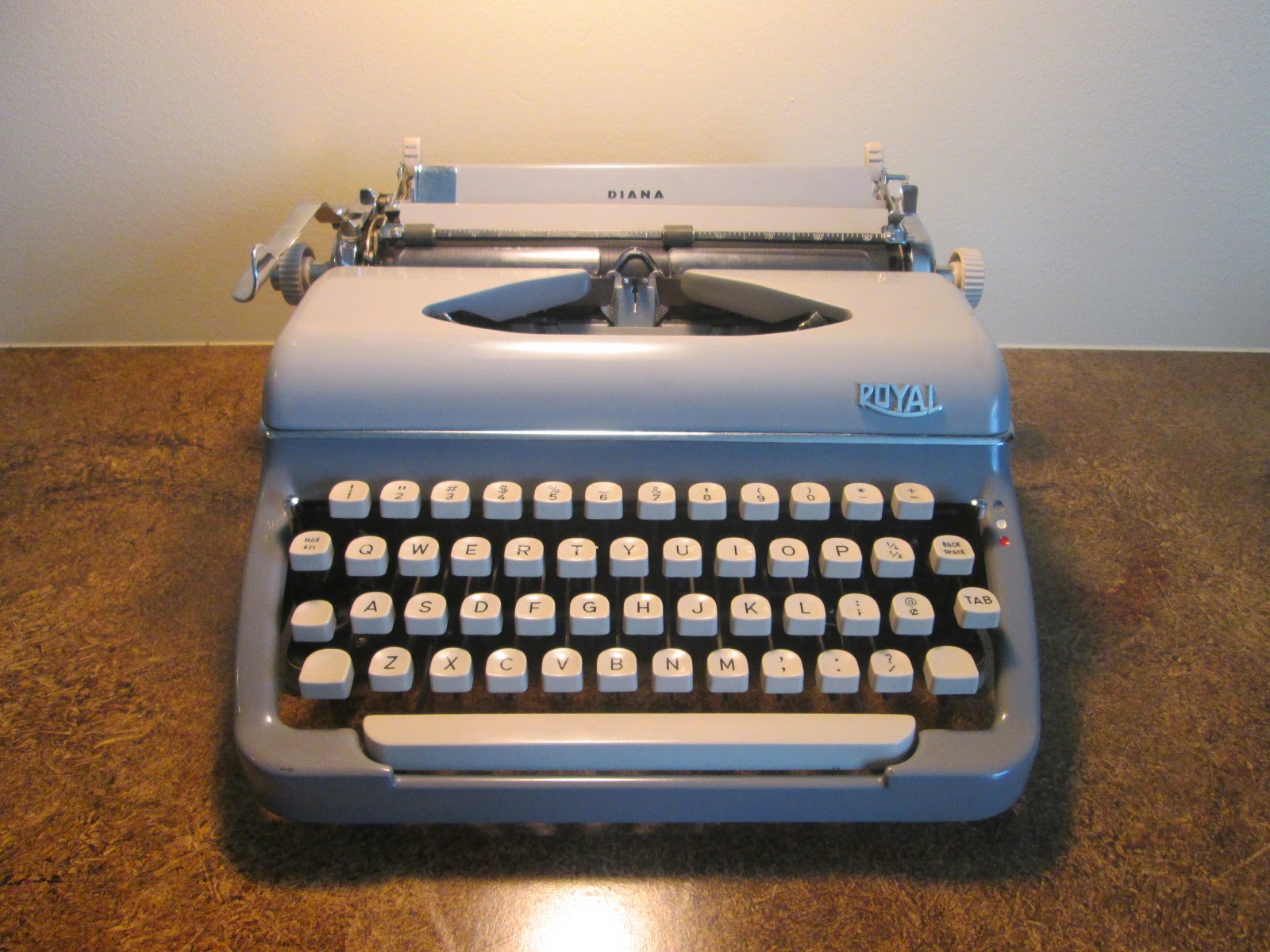 I bought this 1960 Royal Diana typewriter from Spencer's Antiques, in Spokane. 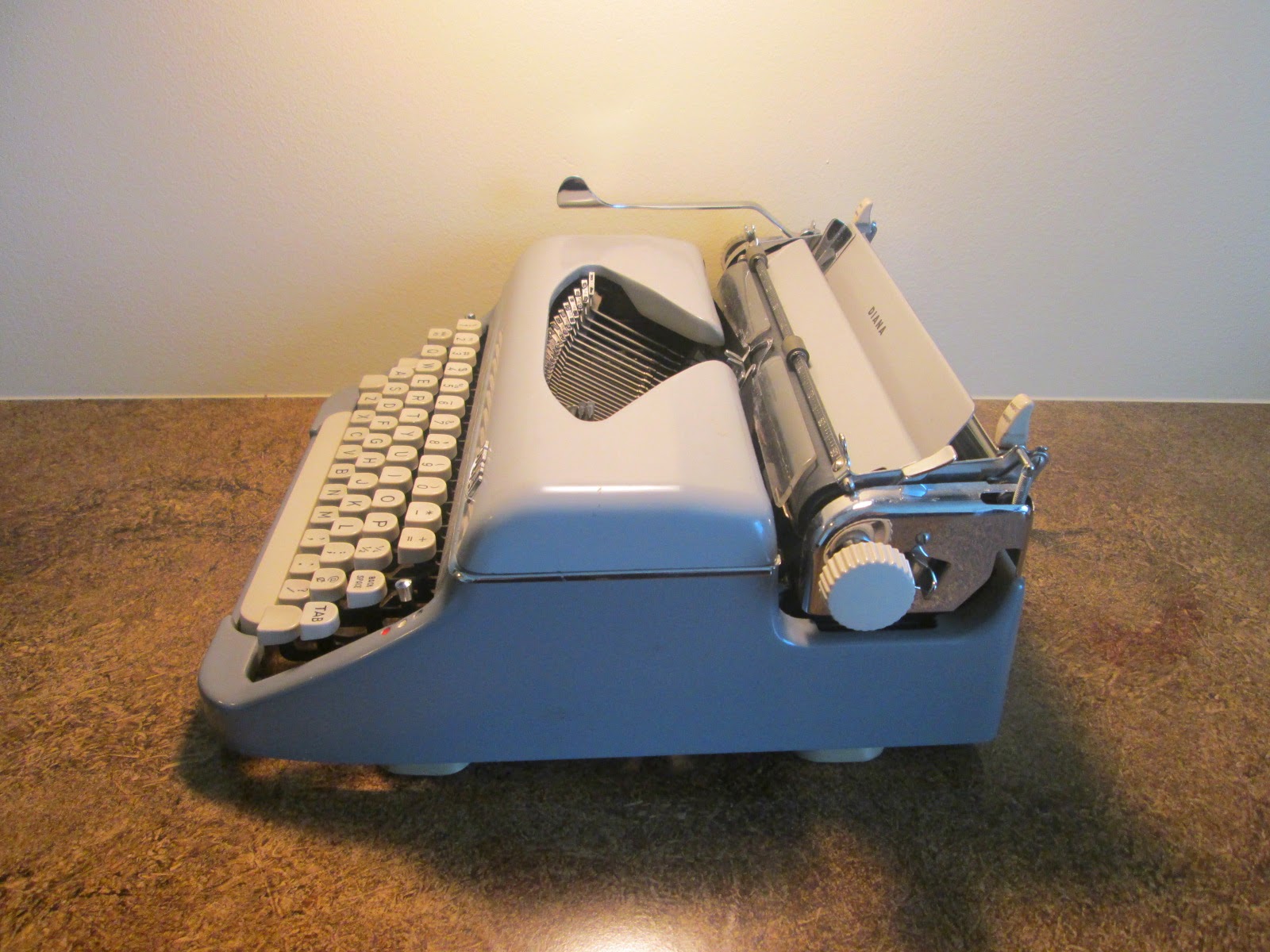 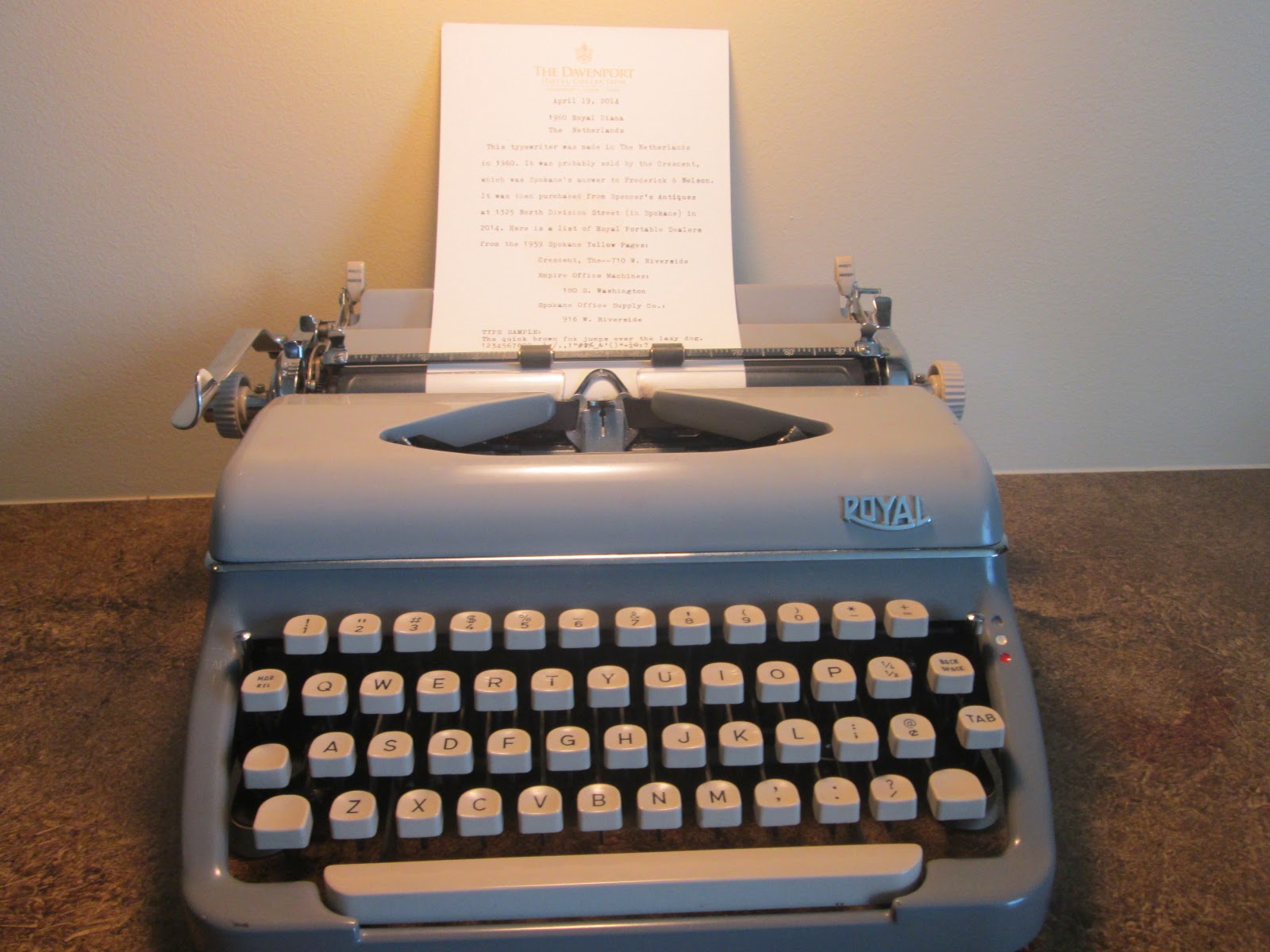 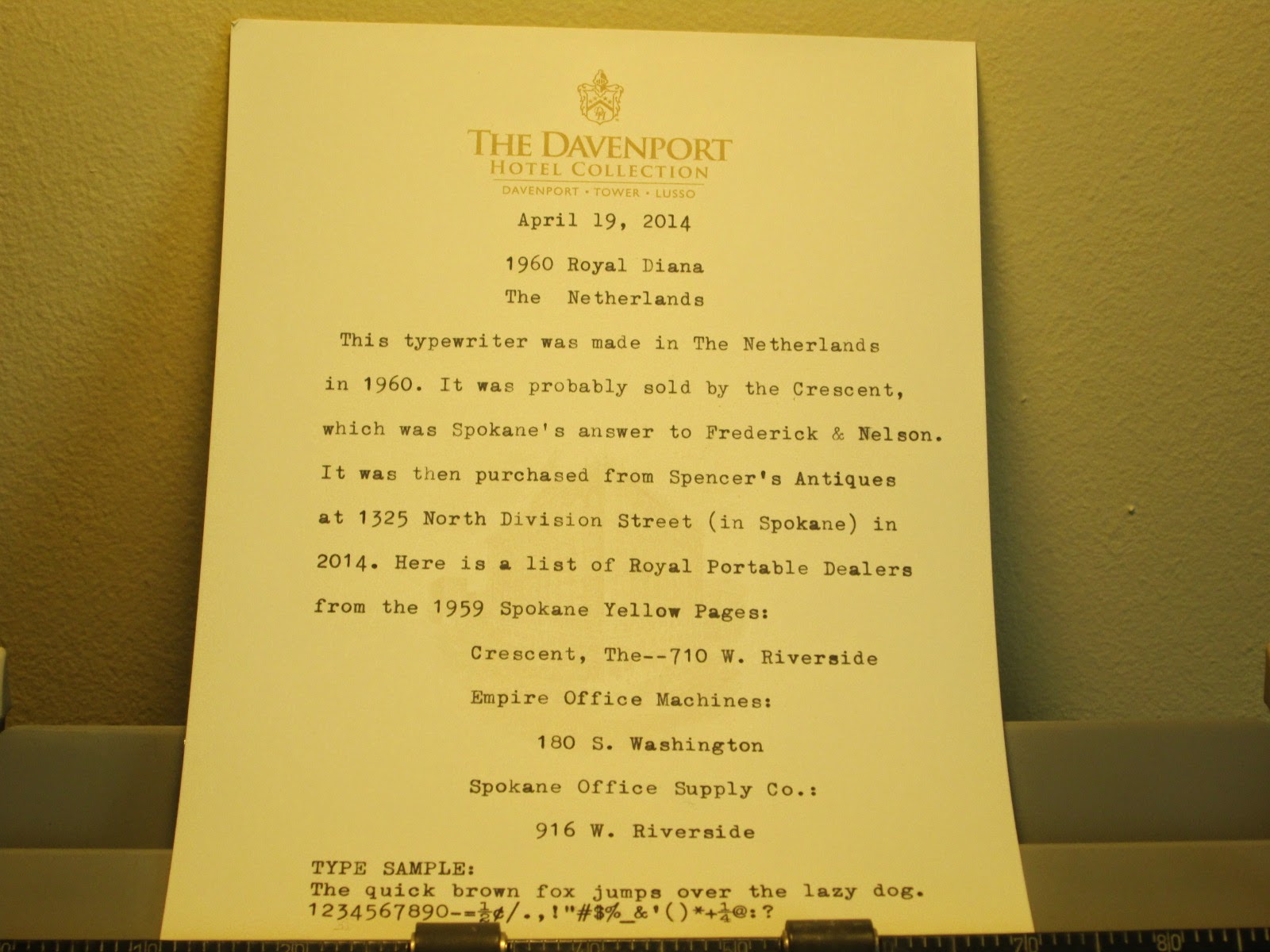 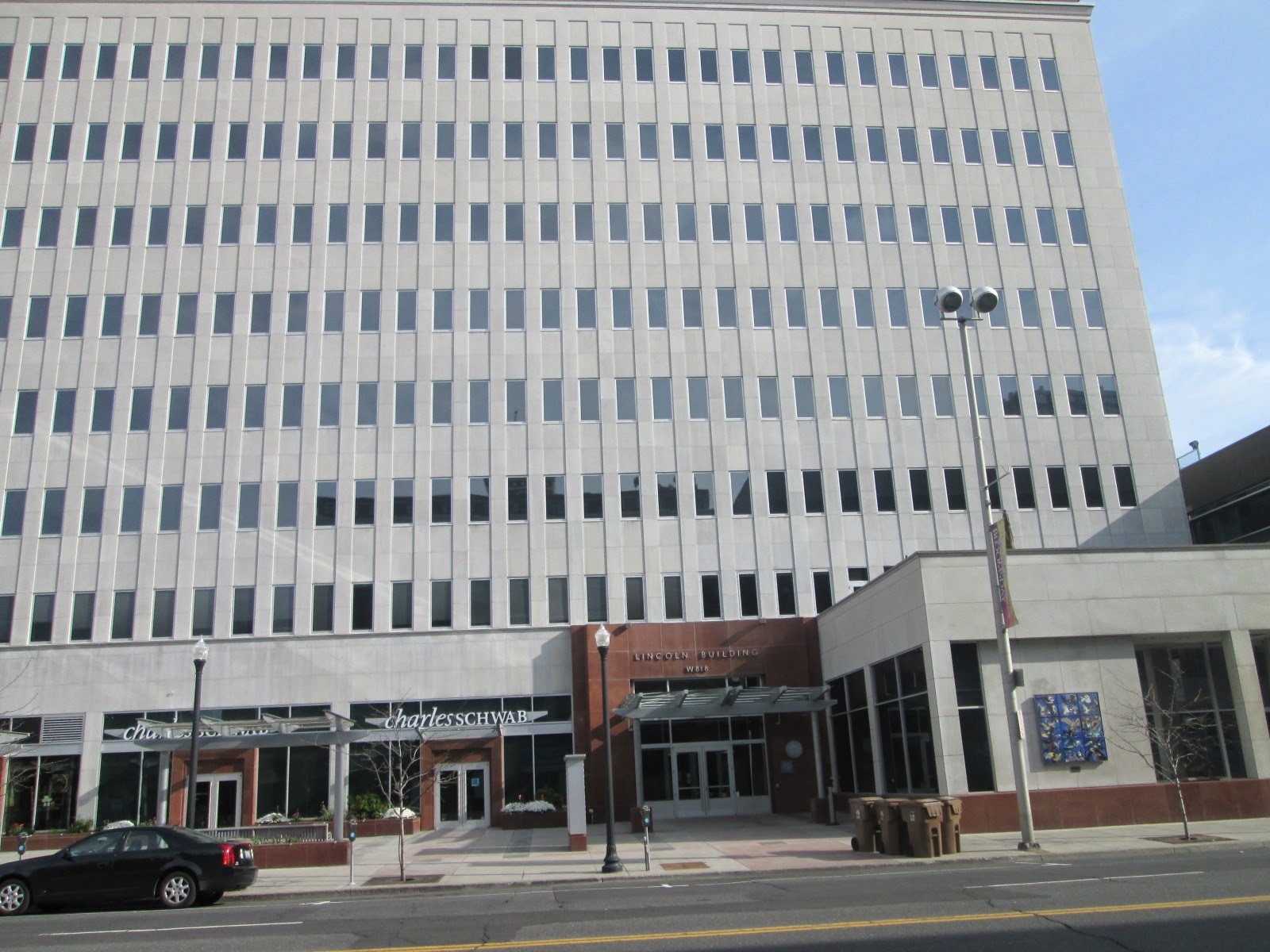 Quite possibly the ugliest bank building I have ever seen (and I like the SeaFirst building!) 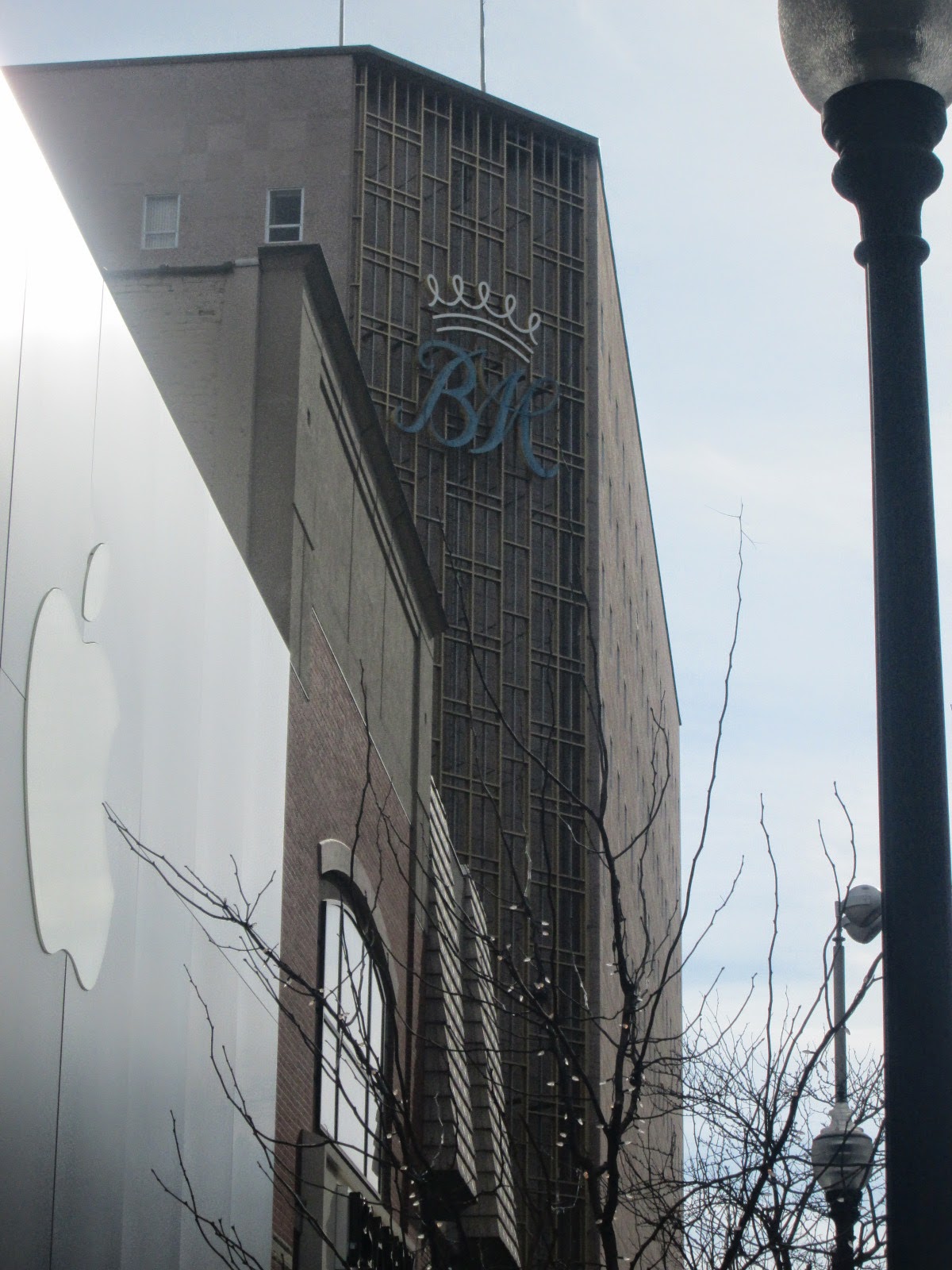 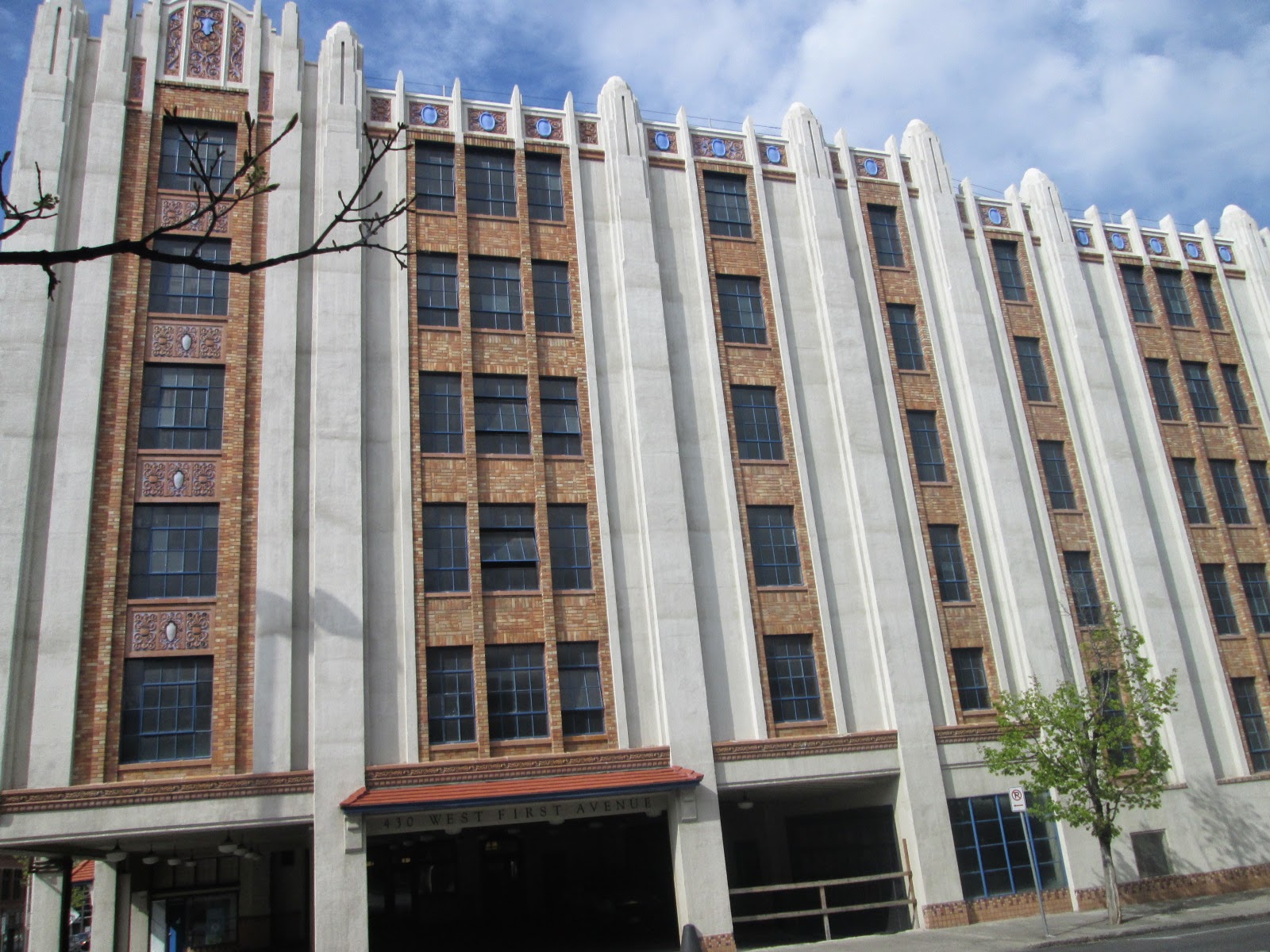 The City Ramp Garage, completed in 1929 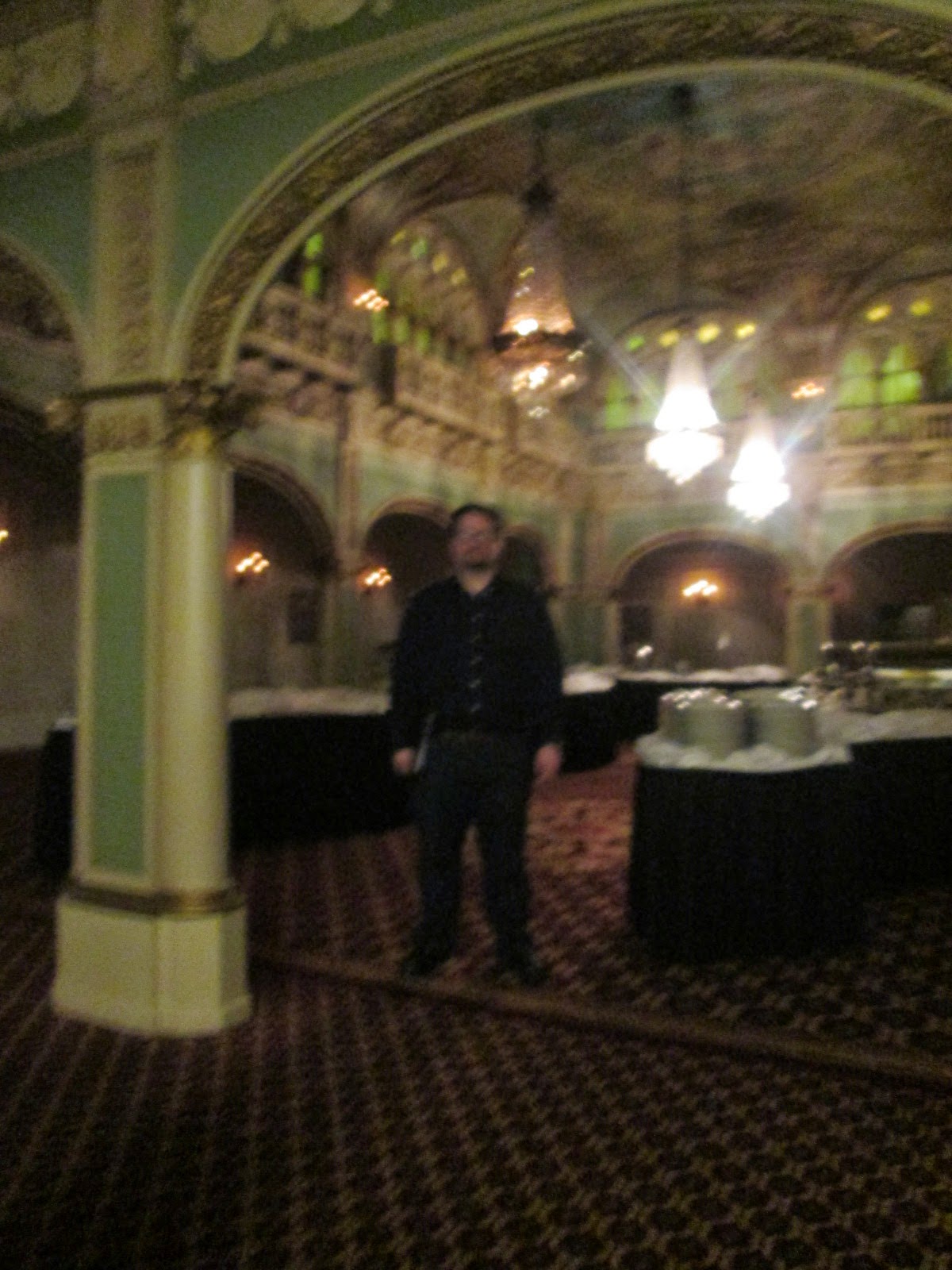 A slightly blurry photo of the Hall of the Doges, in the Davenport Hotel

This is one of the first Olympia SM-7 portable typewriters manufactured. (It was made so early that the case hinge consists of a tab and a slot, making the top of the case removable). Notice the finish of the dark gray on the sides--generally this has a rougher crinkle finish, but is smooth on this example. Also, notice the area near the tab-set and tab-clear keys. Generally this has the same texture as the area behind the Olympia logo, but is smooth on this particular example. The case is in relatively good condition, with only a square inch of the vinyl covering missing. It also has the names of the last two owners written in it in ink. (I'm tempted to write mine in it, too, to carry on the tradition...) 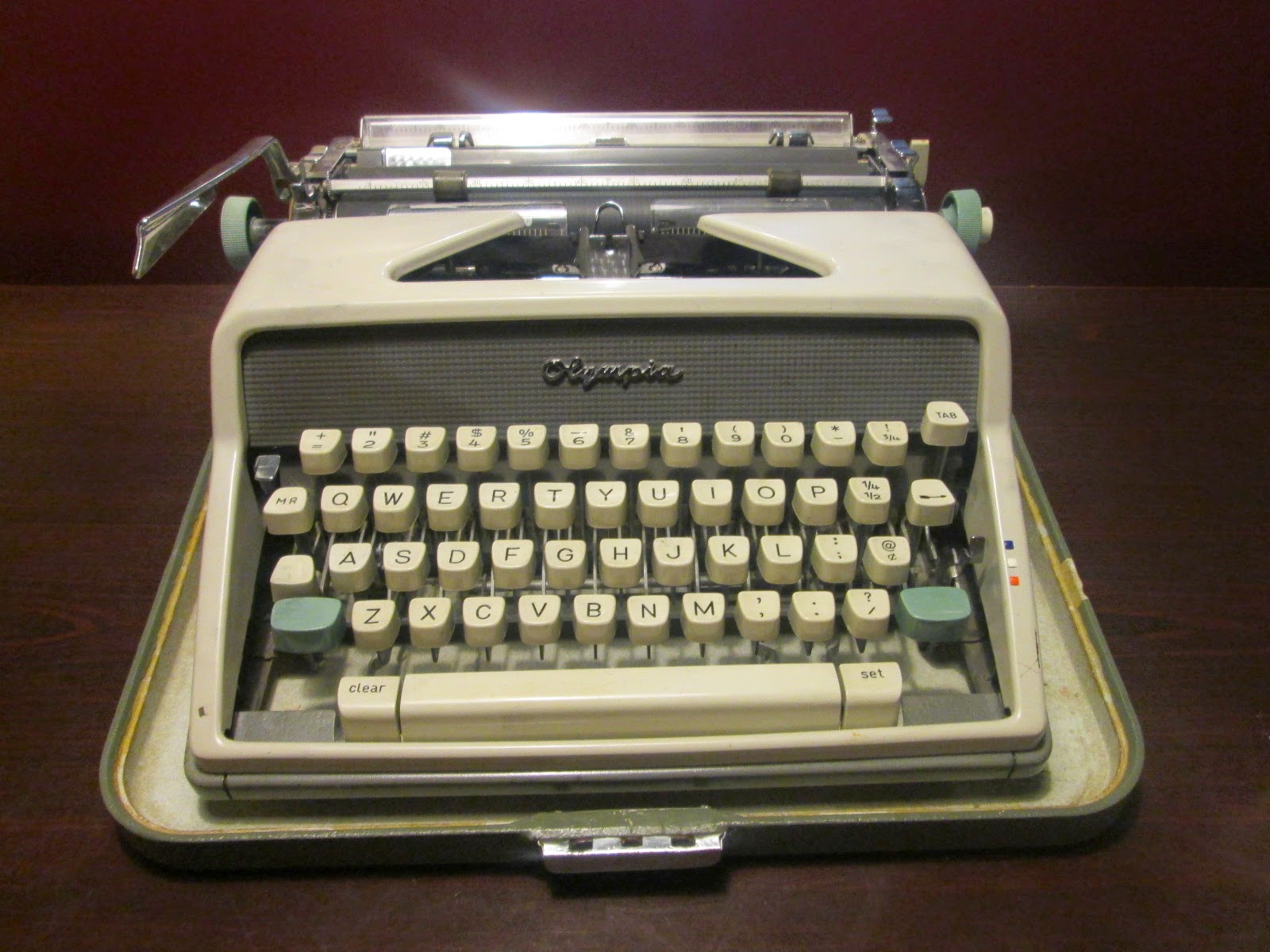 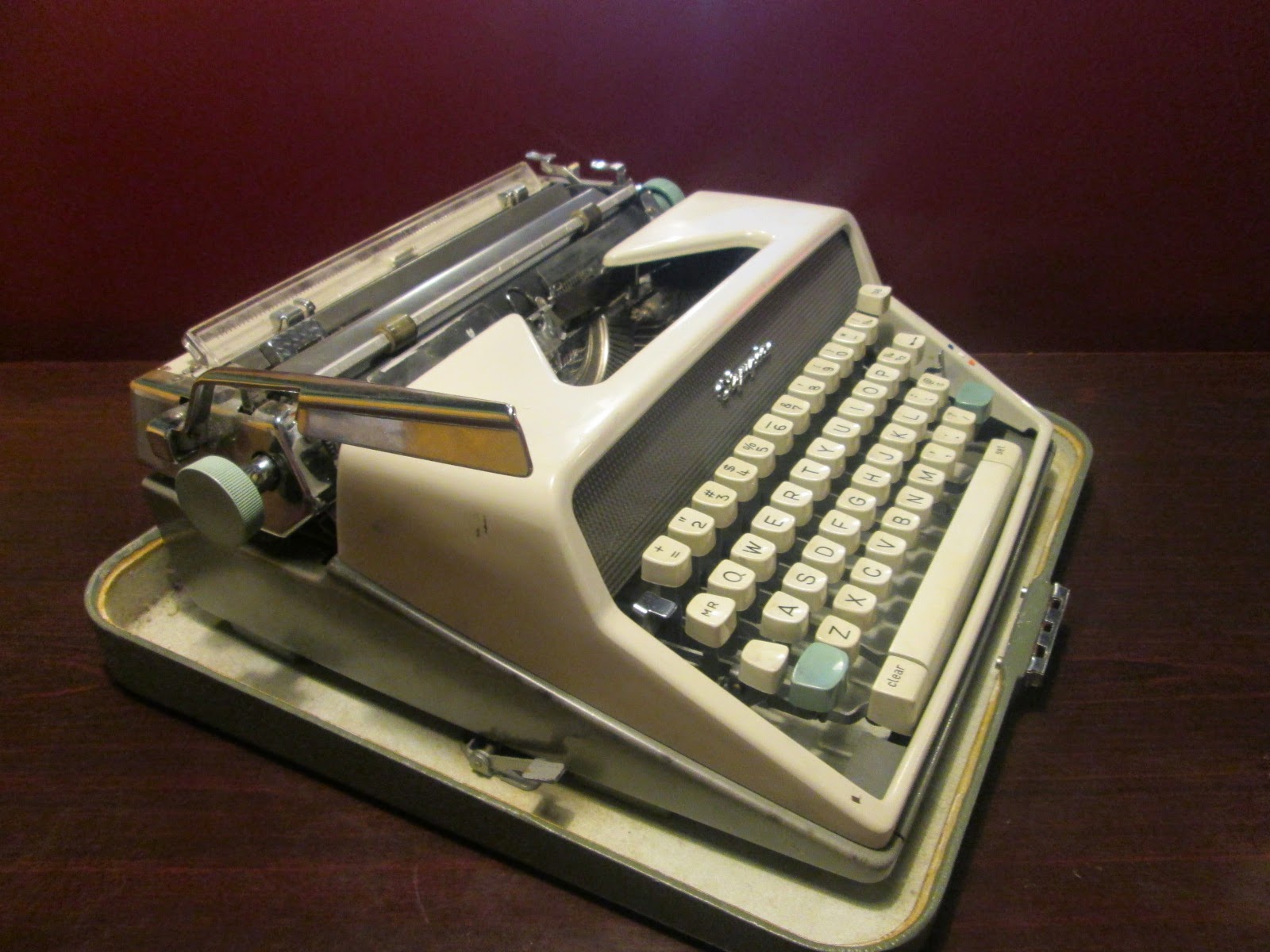 Torpedo 18 at the Seattle Center

I bought a new typewriter--a 1960 Torpedo 18, made in Frankfurt, Germany by Remington-Rand. Here are some views of it taken at the Seattle Center, which was the former site of the 1962 World's Fair 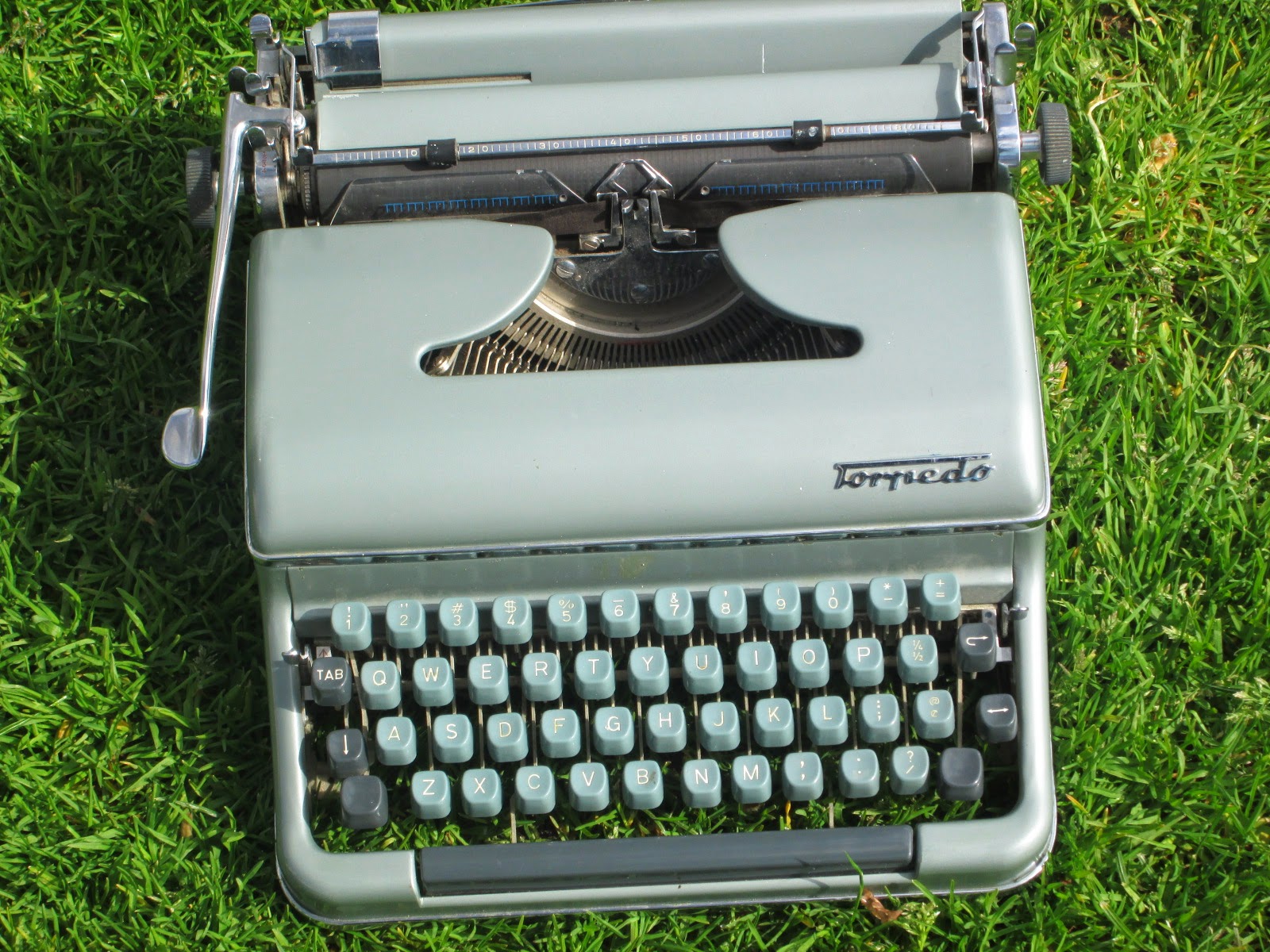 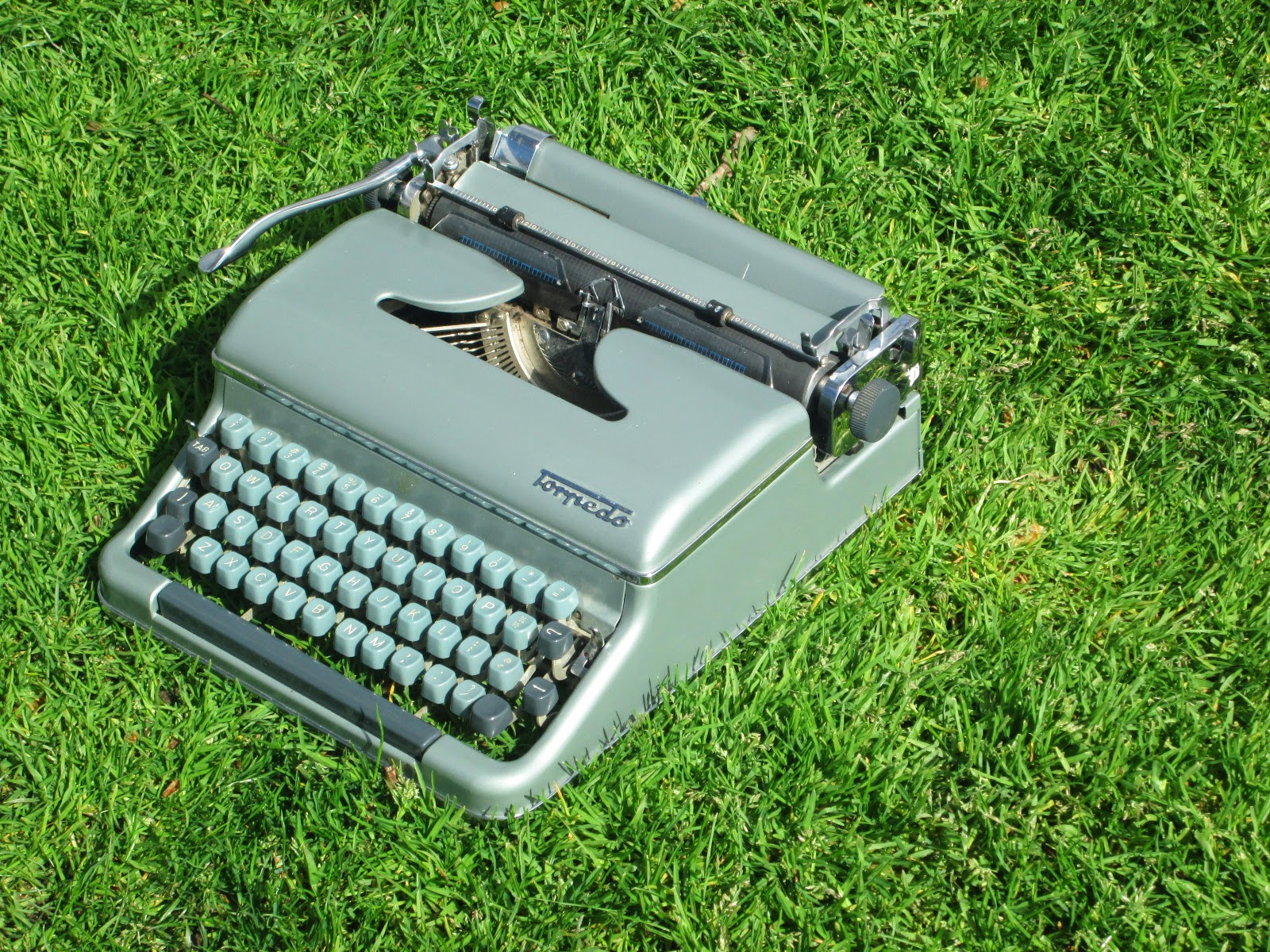 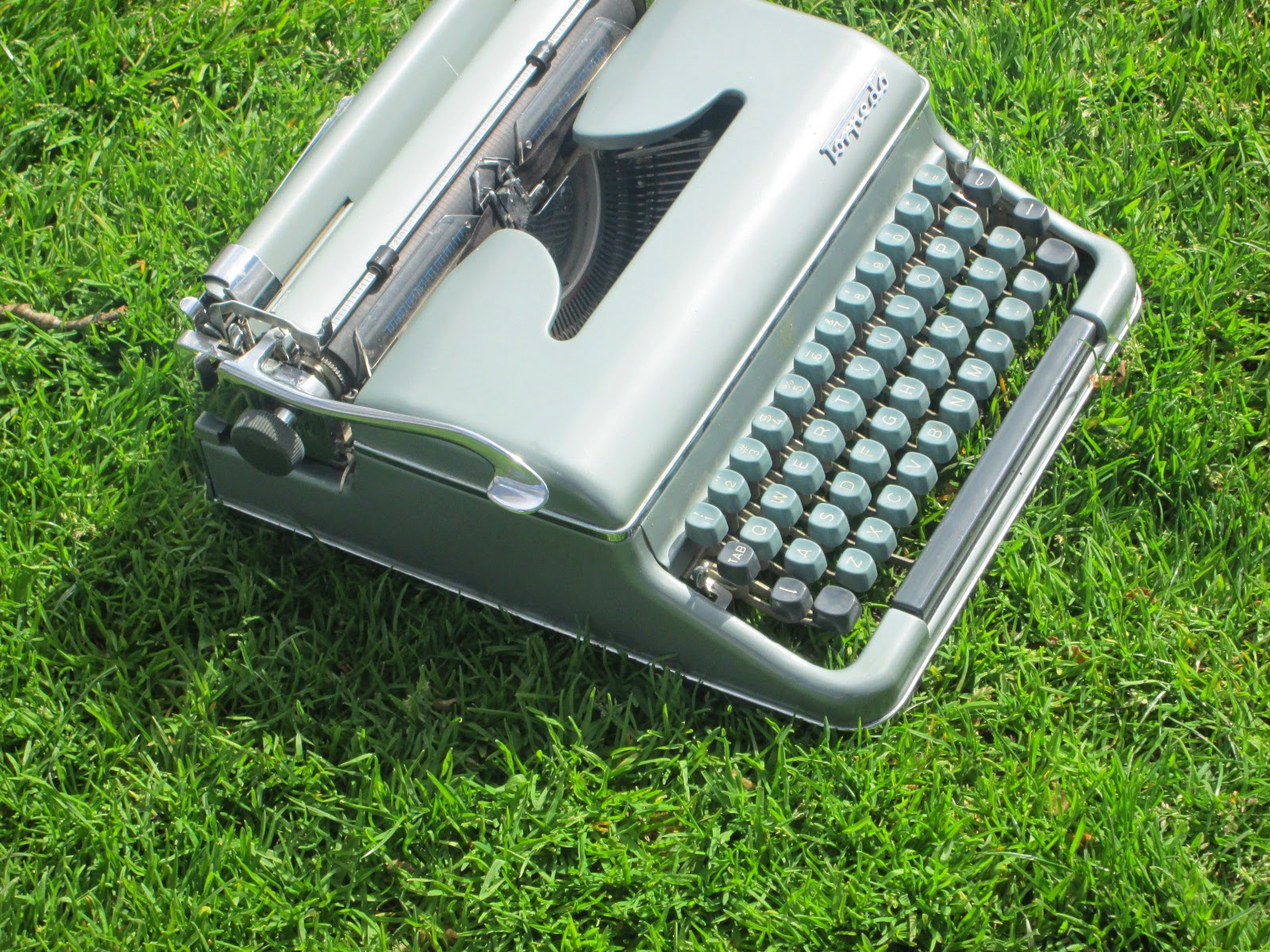 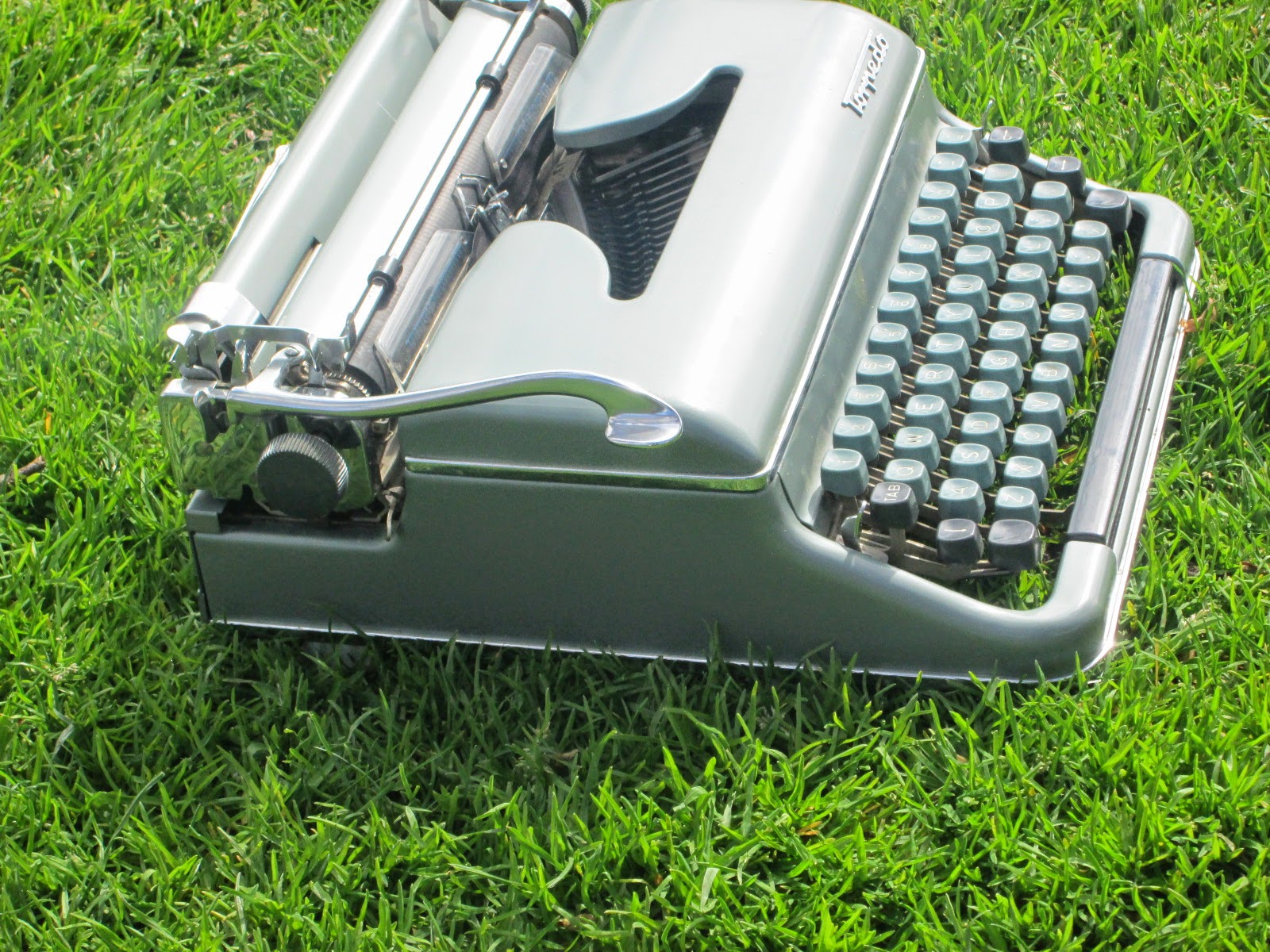 Here I am with the Torpedo at the International Fountain 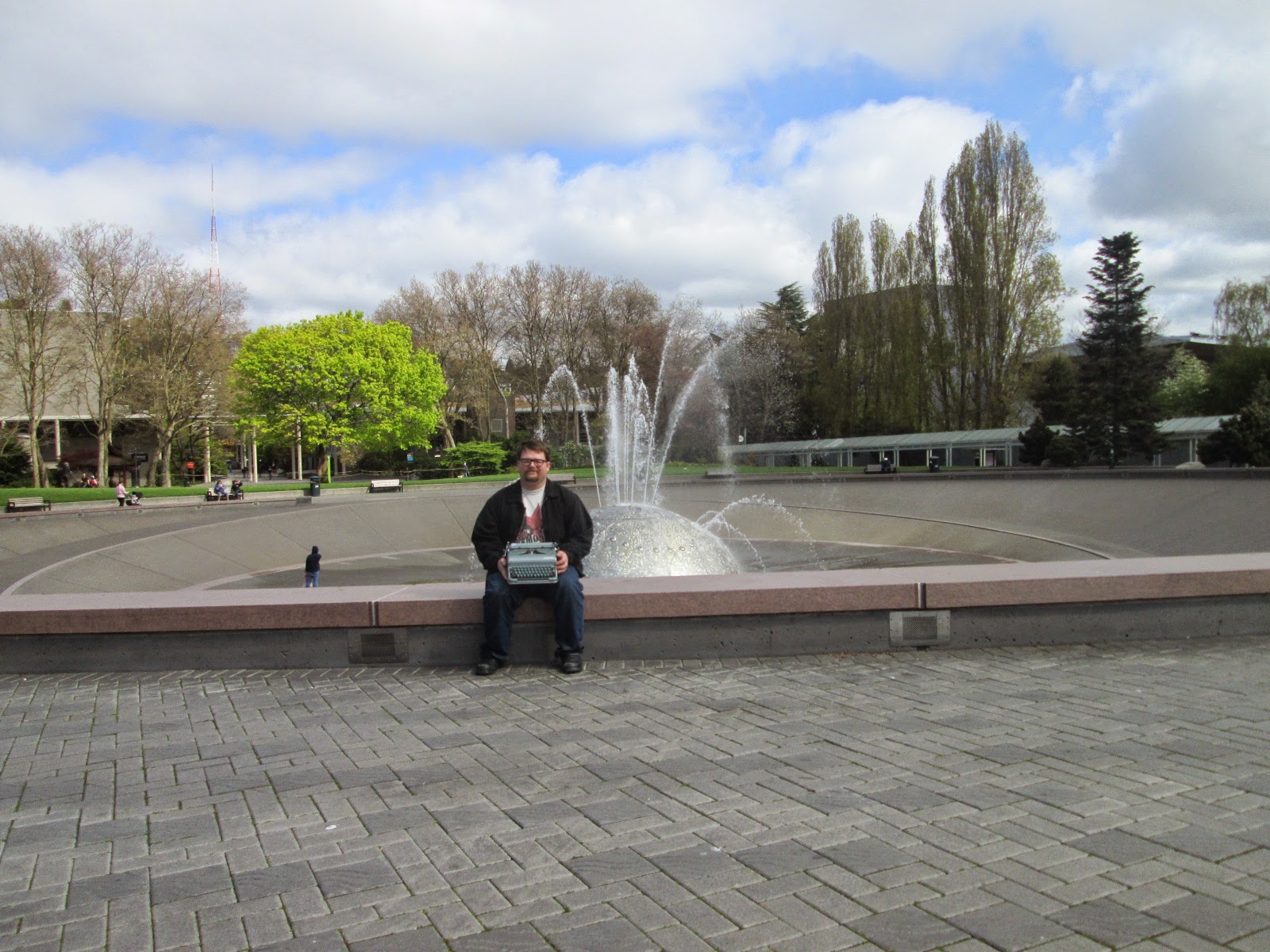 Here I am, holding the Torpedo under the Space Needle: 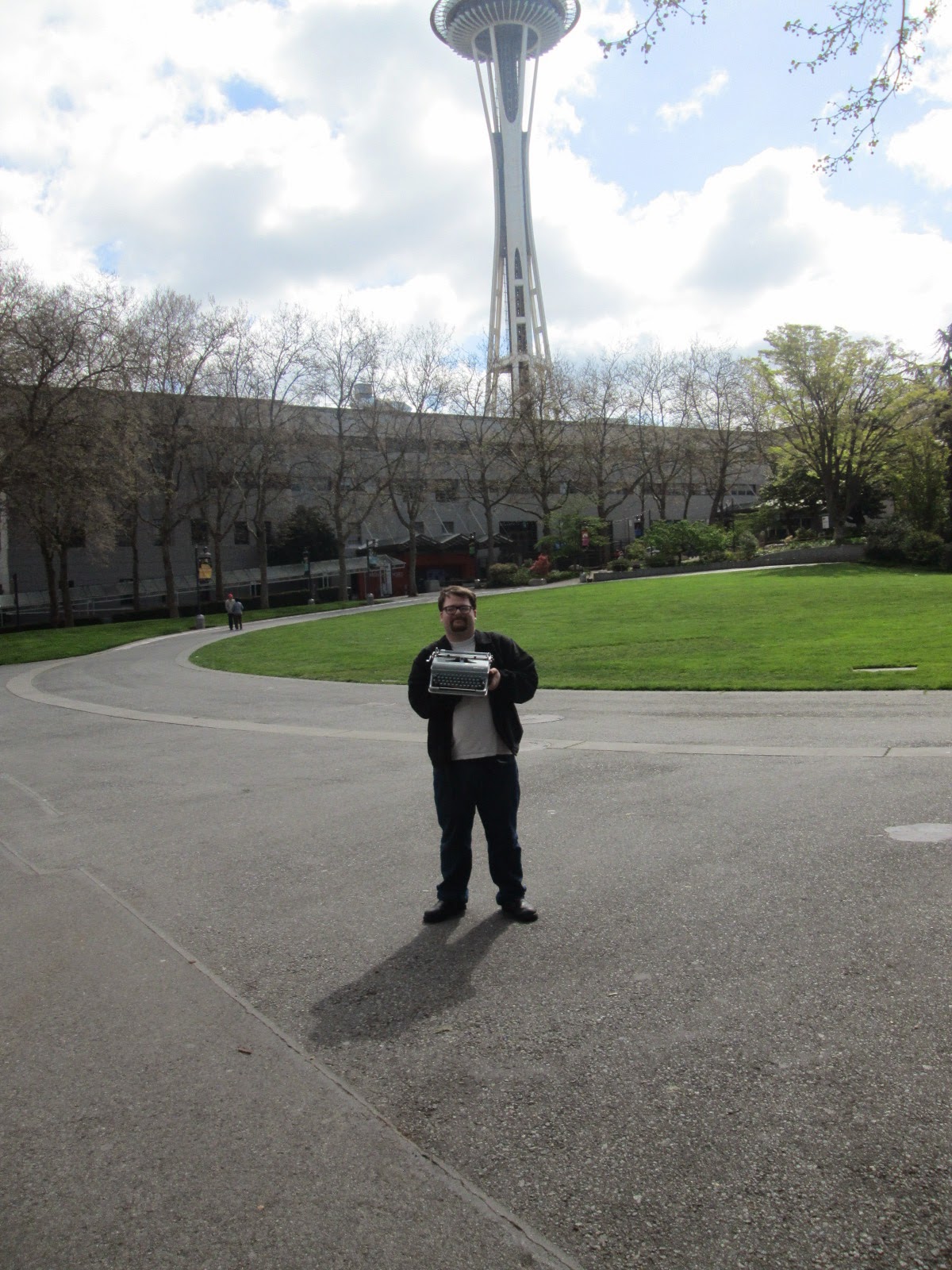 I have always been a big fan of the 1950s Royal Quiet Deluxe portables, no matter what color they are. (Personally, I'd like a pink one, but they are always so expensive.) I like them because they are great machines to use,  with a nice, light, adjustable touch, and a well-designed (although manually-set) tabulator, not to mention the Magic Margin found on so many Royal typewriters. They also have the advantage of being plentiful in the Northwest (I was told by Richard Polt that in Cincinnati, that 1950s Remington portables are very common, often appearing at thrift stores. This was also true of 1950s Royals in Seattle, until recently. Now they are very commonplace in antique shops in the Northwest.) Most look like the one below: 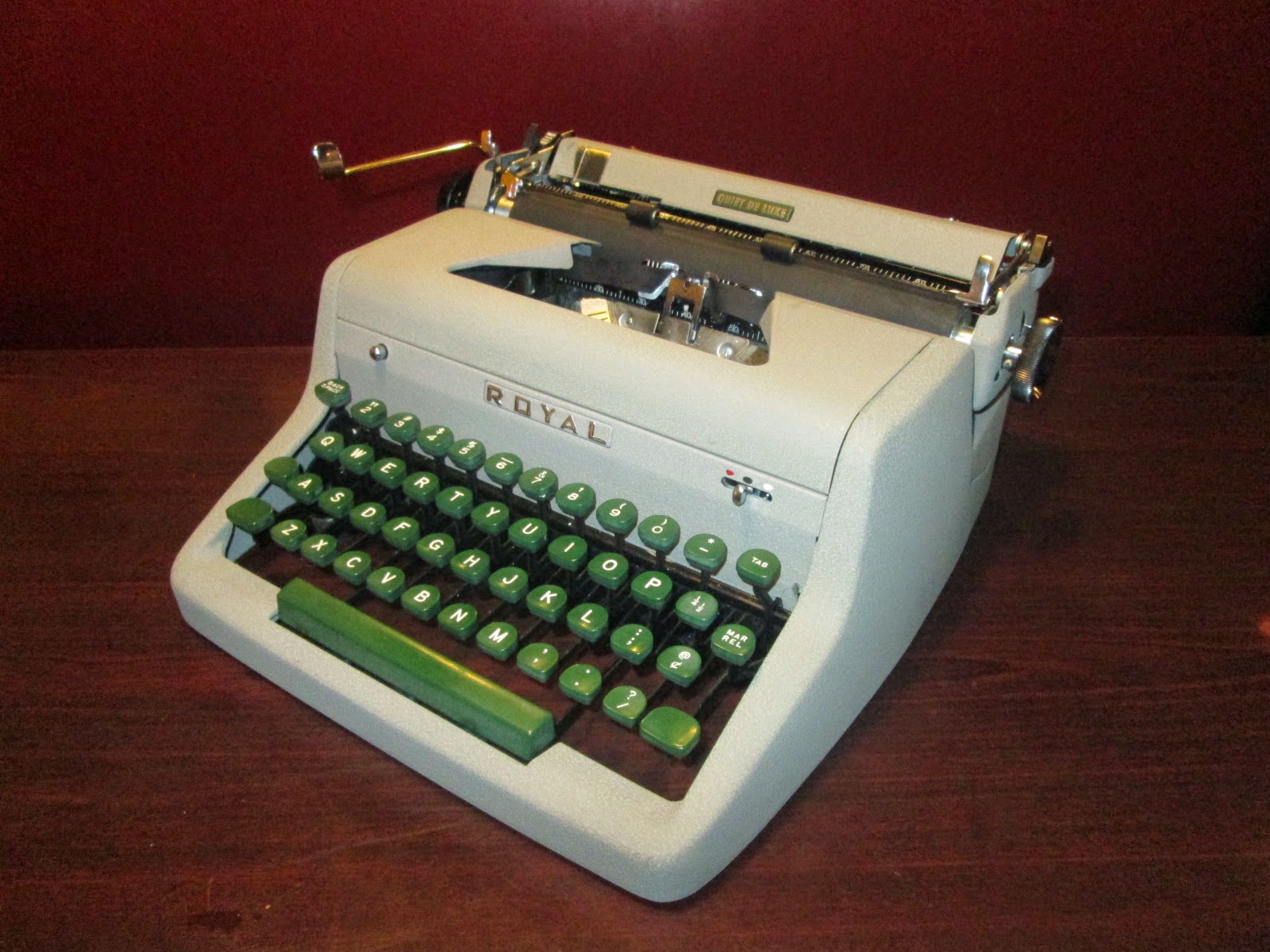 Generally, these typewriters are not as clean as this one was when I bought it--this is the exact condition it was in when purchased (I changed the ribbon) 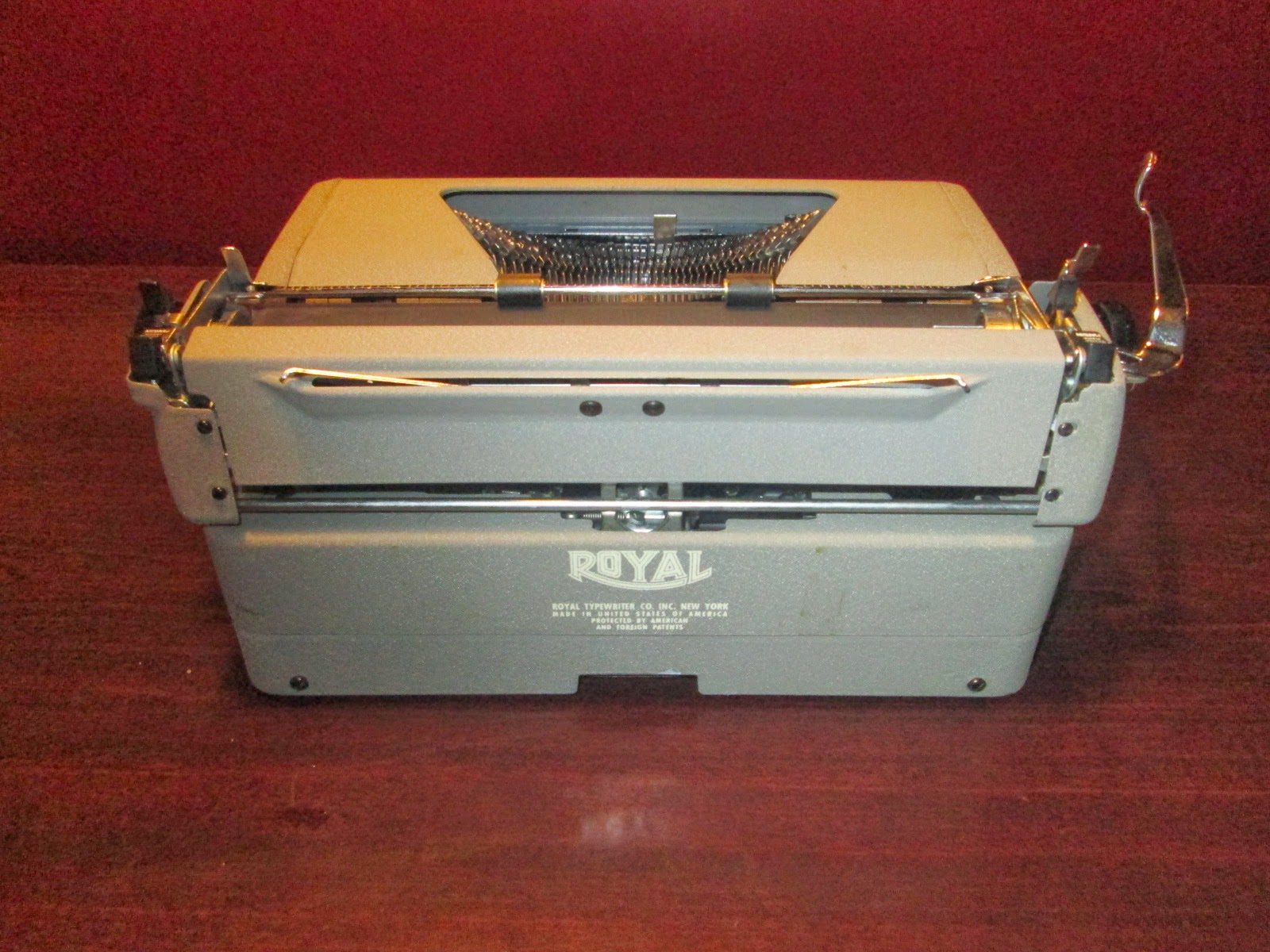 Here is the back of the machine. Notice the excellent condition of the paint and the decal on the rear. Generally these are scraped from putting it in the case. 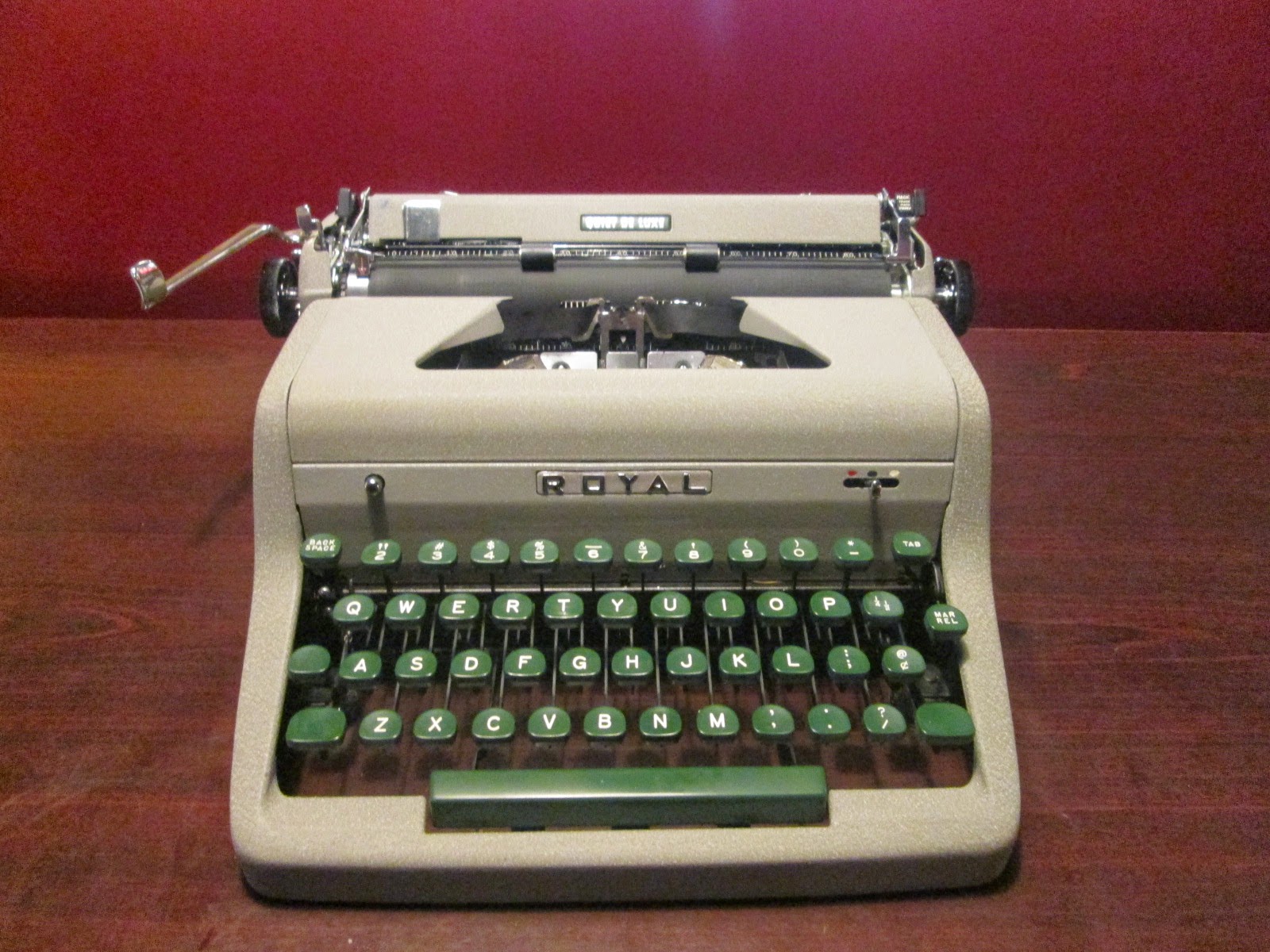 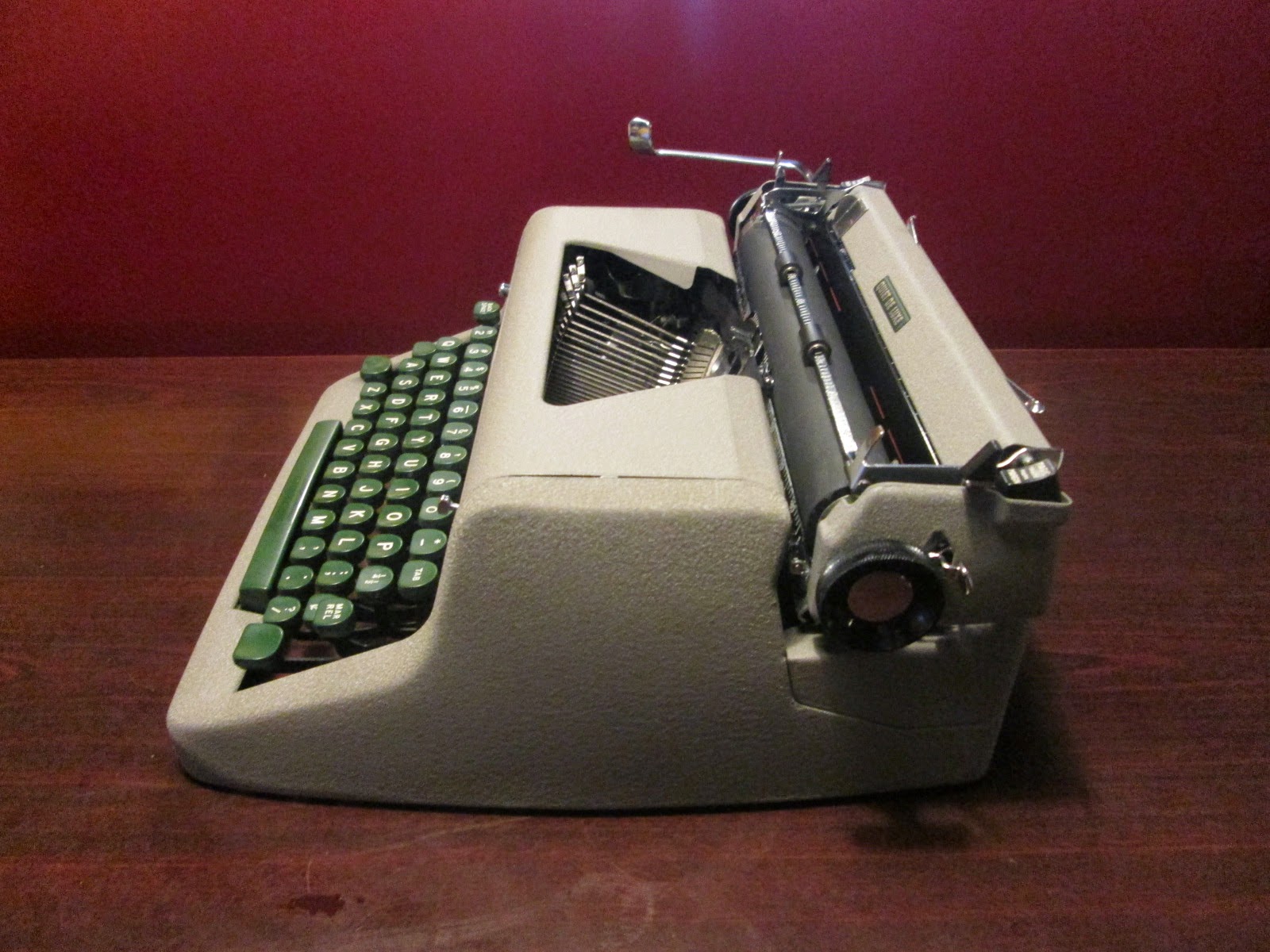 This typewriter was designed in 1947 by Henry Dreyfuss, and manufactured until the late 1950s. The only changes were made in 1950, when the glass-rimmed keys were replaced with plastic ones, and the body was made more rounded; and in 1953, when a push-button ribbon cover was introduced. In 1957, the ribbon carrier was redesigned for a quicker, less messy ribbon change. Sometime around 1954, the rear panel was redesigned, to wrap around to the sides. Around this time, the Quiet Deluxe finally received a carriage lock. This prevented damage to the carriage while being carried in its case. 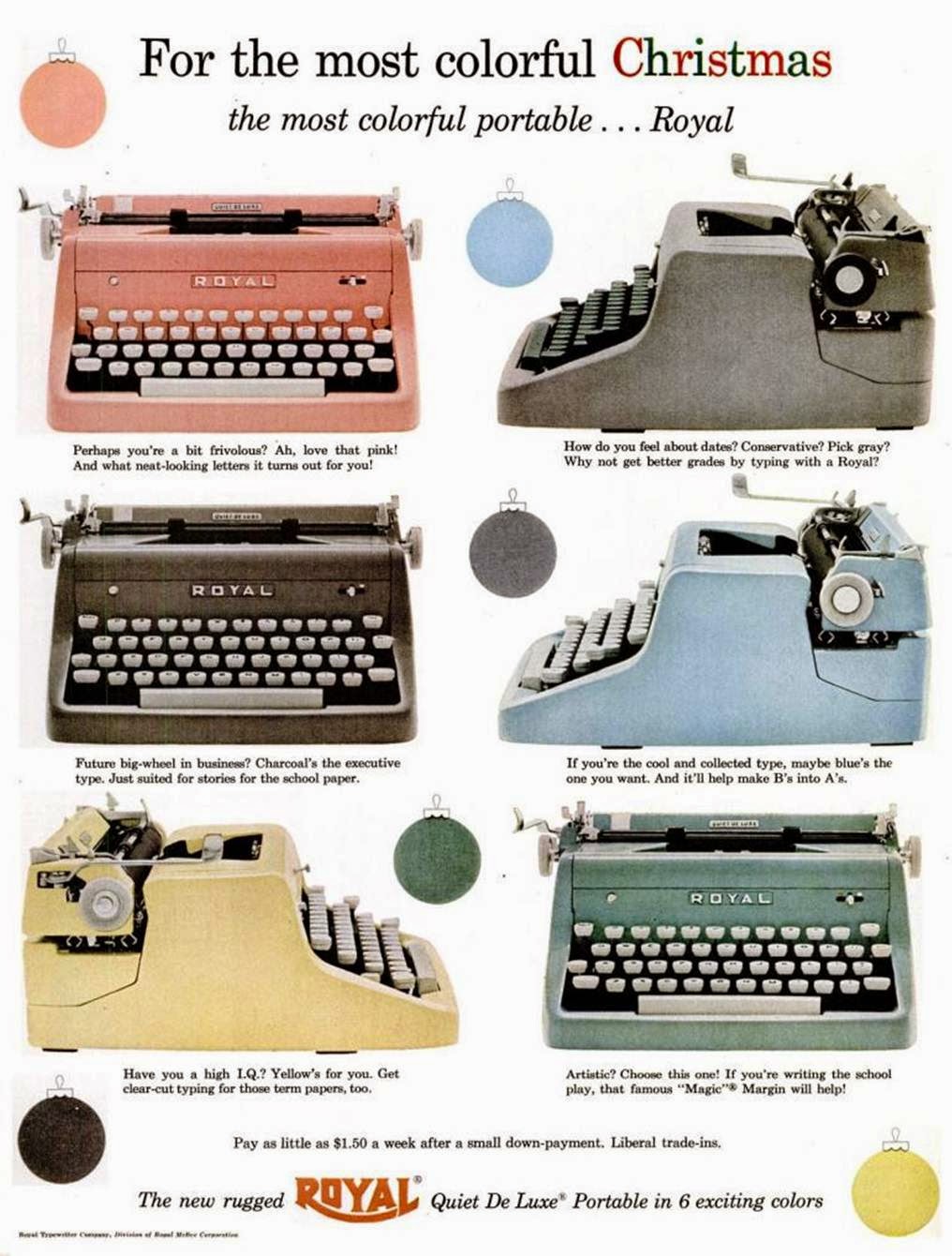 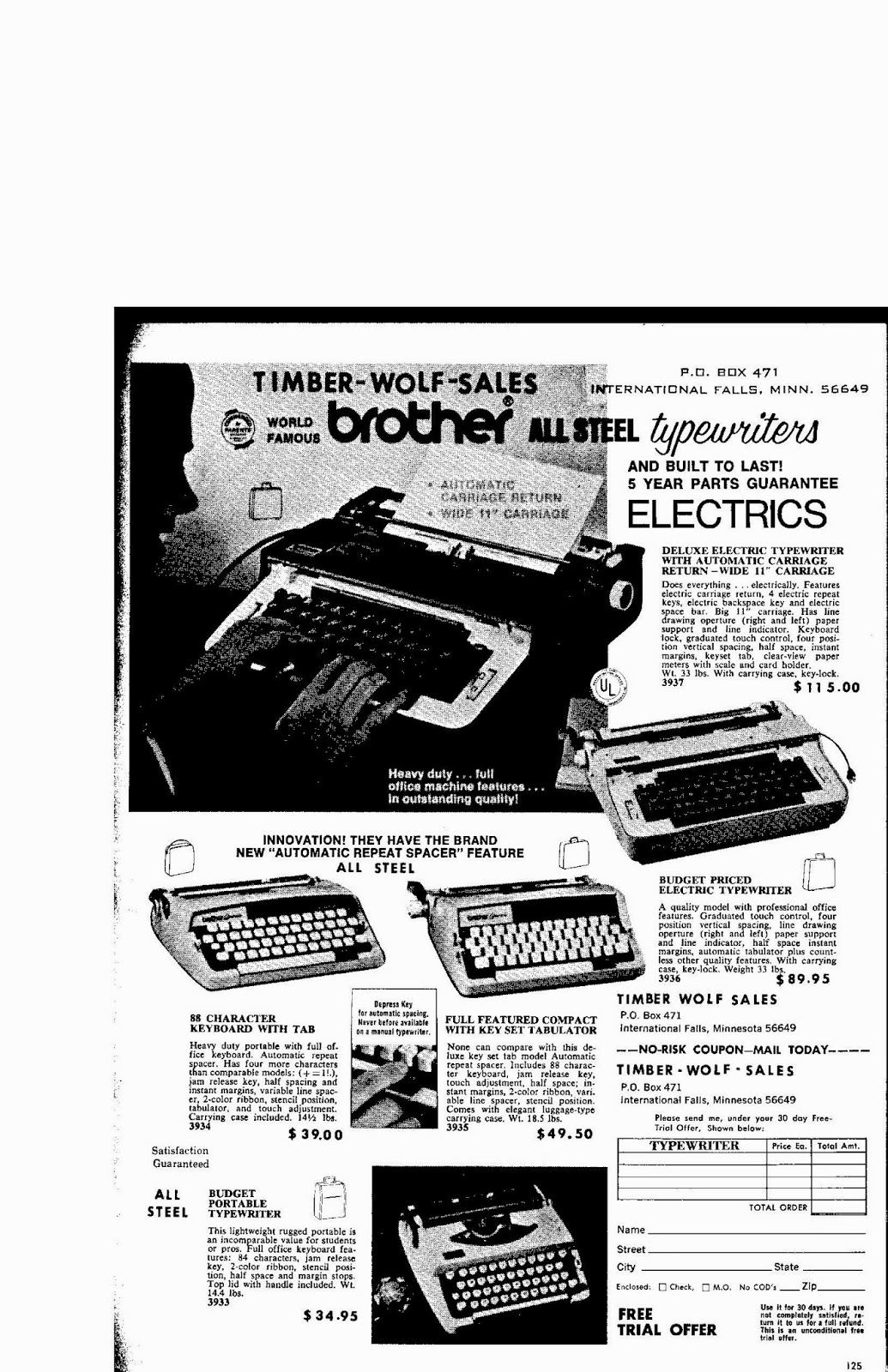 Below: An advertisement for Timber Wolf Trails, 1970. Like the typewriters, the land did not exist. I should also point out that Ontario is in the Northeast of Canada--not the Northwest. Looking at this advertisement, it is clear which of their operations had a higher priority--the lettering is well-lined-up, and it looks like they spent time creating this one. According to the Bureau of Labor Statistics, $12,750 in 1970 had the same buying power as $77,150.97 does in 2014. 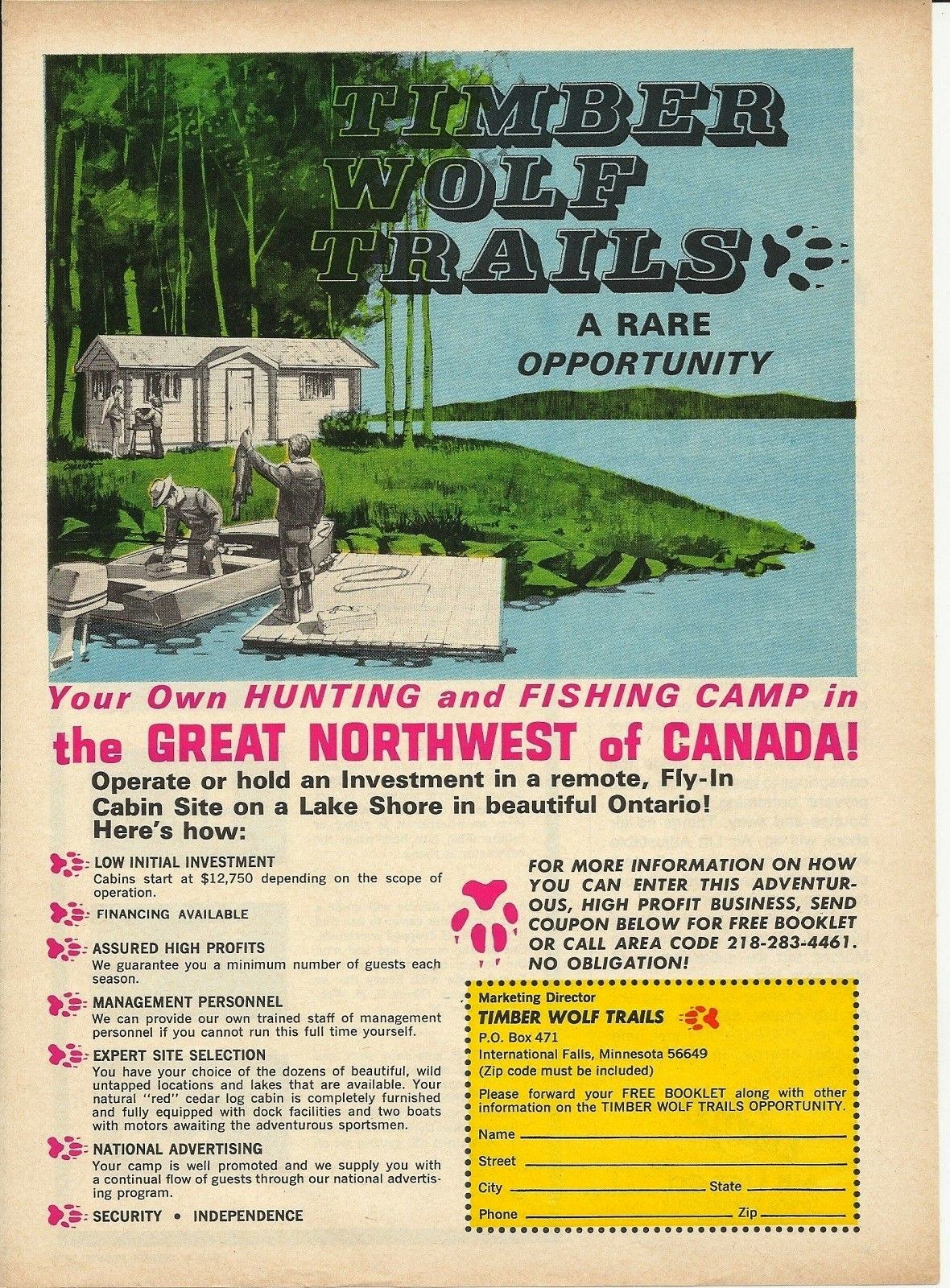