In 1938, a new compact portable typewriter was introduced by the L.C. Smith & Corona Typewriter Company. Called the Zephyr, it was designed to fit under a train seat. It was discontinued in 1942 with the onset of World War Two. In 1949, it was redesigned and reintroduced as the Smith-Corona Skyriter. By the late 1950s, production of the Skyriter had been moved to West Bromwich, England. By 1960, the Skyriter's design was showing its age. David Chase and Philip Stevens were hired to redesign the Skyriter. In 1962, the end result was introduced. The new machine had an all-plastic casing, and a snap-on lid. It was called the Corsair. Later, other model names were introduced, such as the Smith-Corona Cougar, Smith-Corona Zephyr II, Smith-Corona Porta-Typer, Smih-Corona Skyriter, Smith-Corona Star-Riter, just to name a few. In addition to the Smith-Corona models, department store versions were also made, such as the Penncrest Jayvee, Sears Scout, and Sears Tutor. All of these typewriters were identical to the Corsair, with the exception of the Sears Tutor, which had a different ribbon cover, in a v-shape. There was another model, called the Attache, which was a white plastic version of the Tutor, which came in a metal attache case. (All of the other Corsair models came with a snap-on lid.) While most of the typewriters came in either beige or blue, the Tutor was available in a choice of "Medium Blue," or "Hot Coral" (a red-orange shade of pink.) Hot Coral must have been a  relatively unpopular color, as it was discontinued after a year. The Sears versions ended production in 1970, the Corsair in 1979. 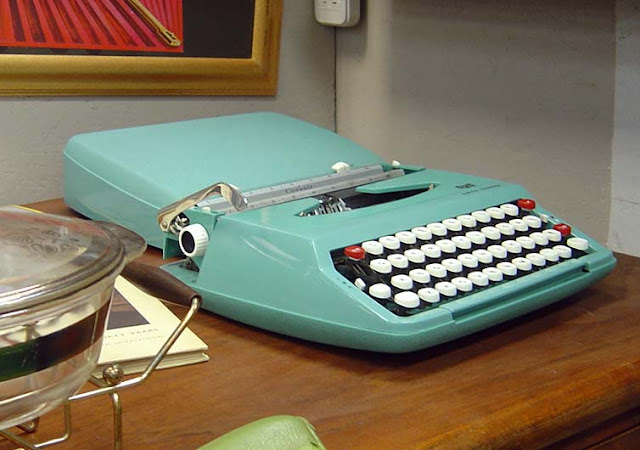 The Smith-Corona Corsair in Aqua (photo by Richard Polt) 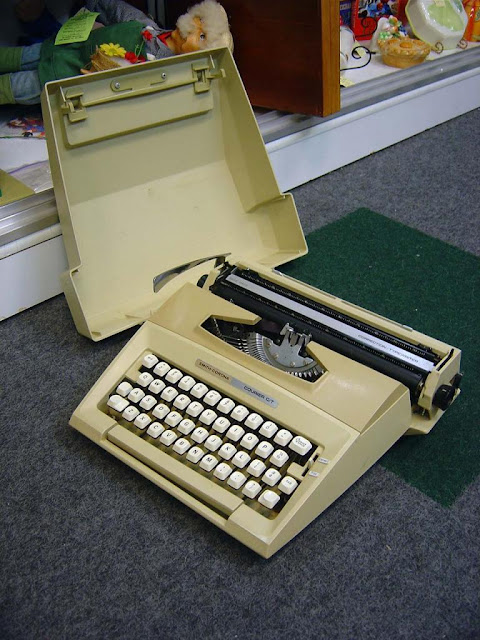